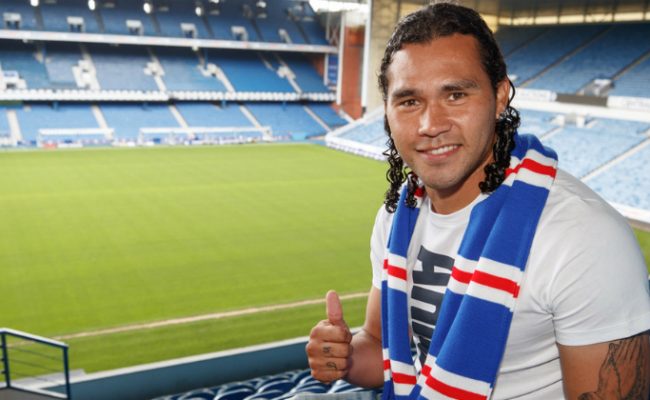 If there is one thing Rangers have missed in recent years, it has been the modern position of ‘box to box’ midfielder.

That is, a midfielder who can cover the grass from both boxes as effectively as each other, fulfilling attacking and defensive duties especially well, and particularly being able to nab a decent handful of goals or more from midfield.

Some had hoped Jason Holt might be able fill that role, but the truth is he simply is not that kind of midfielder, nor, in truth, is he good enough.

But manager Pedro Caixinha believes the problem is solved now with the signature of Carlos Pena, a player the manager confirms he has followed since 2012 and who he thinks can get goals from deep and help out in midfield in a way no other Ranger has really been able to effectively for a long time.

“Carlos is not only a powerful midfielder, he’s what we call a box to box player. It’s a number 8 which can be converted to number 10, an attacking midfielder that always moves the game forwards and is having a lot of range in his amplitude of movements.”

It must be said this overview is a very positive addition to the squad, the type of player Rangers have rarely really had in recent years, and to compound it, the lad is an international for a very strong Mexico side.

“He likes to arrive on the box very very often, so it’s one player who sees the game all the time very forward, and that makes him a midfielder who scores lots of goals, that makes a lot of assists.”

If Rangers’ midfield has lacked anything, beyond the obvious Barry Ferguson dictator type, it is the dynamism of a box to box player who can support attack and defence while scoring goals into the bargain.

If Pedro has this one right, and he knows the player far better than you and I, it could be a brilliantly astute signing and well worth the reputed £2.2M Rangers shelled out for his services.