Home Rangers Is the SPL too physical for its own good? 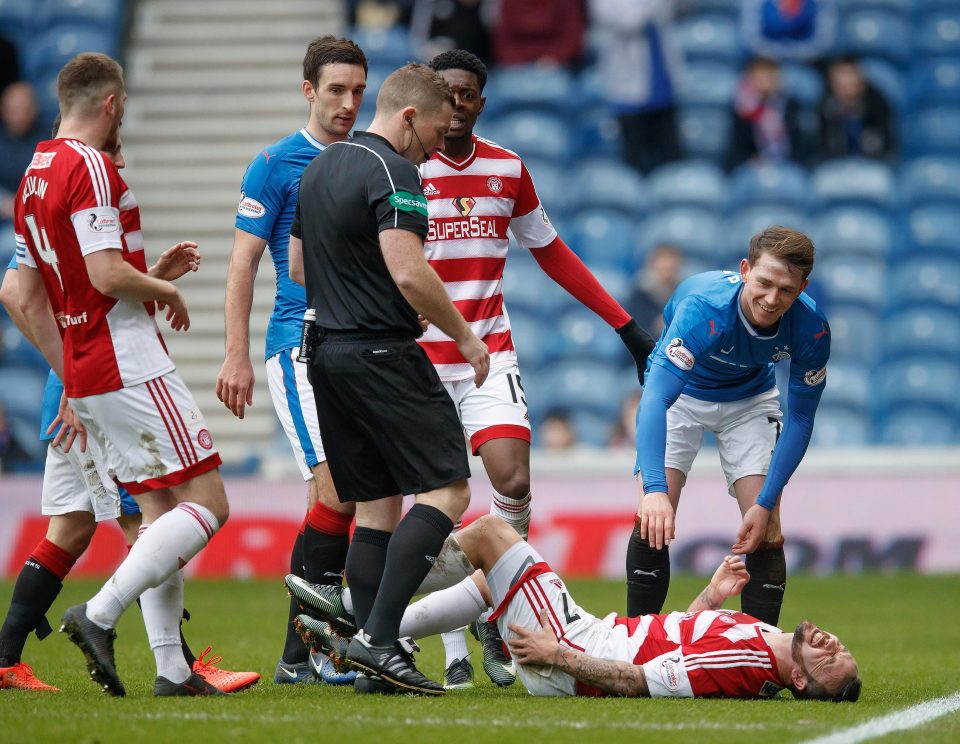 The SPL has long been known for playing fast, erratic football with too many of the players not possessing a good enough first touch. Graeme Souness called them ‘Hammer Throwers’ because most of the players didn’t possess a high enough standard of footballing technique.

It is too frenetic for its own good. Some games are often quite brutal with over the top physical, late challenges happening all over the park and most of the attackers are at it as well.

I know the attackers sometimes get roughed up with a lot of challenges flying in with most of the games in the SPL and more often than not, the forward gets no help from our mostly deplorable refereeing decisions. This leaves the attackers extremely frustrated and aggrieved and the only way they can get their own back on the guilty defender is to retaliate by waiting for the defender to clear the ball and the forward taking the opportunity to kick him hard.
The player makes out he went for the ball and was just a second late, but they know exactly what they are doing.

Bringing in players from Portugal, Mexico and other foreign countries requires players who have genuine talent, and who can learn quickly how to combat the treatment regularly dished out up here. It helps if they have the physique to face the animosity dished out in most games played in Scotland.

Joe Garner and Harry Forrester spring to mind in the Rangers team for dishing it out themselves. This makes it more difficult to bring in good young players to this type of environment – it’s often men against boys!

This style of football led to the downfall of the bread man in the SPL. Warburton NEVER went to see any of our opposition playing at home and then he was shocked when his Rangers team were mostly bullied out of the game, causing too many of his players to give the ball away too often.

The first twenty minutes of away games are vital in the SPL, especially if you lose the first goal. This happened on numerous occasions in our matches and we were then chasing the game with the home team gaining in confidence and the Rangers team losing some of theirs.

I personally find that almost all of the Scottish games that don’t include Rangers or Celtic are hardly worth watching; and that even includes just the short highlights of the amateurish BBC’s Sportscene.

I know the money down south is astronomical compared to us poor relations up in Scotland. Down south the centre halves are all tall, athletic and quality defenders who are also excellent in the air. Now compare that to what Warburton signed for Rangers – do you get my point?

We lost the Scottish Cup Final in 2015 against Hibernian and a 2nd place finish in 2016, because Rangers lost too many goals from corners, free kicks and poor defending during the last two seasons.

Thankfully, Pedro has rectified this problem by buying two genuine quality Portuguese centre halves who have the experience of playing against top centre forwards and should fit in comfortably in Scotland because of their defending and other footballing skills.

When you tune into Sky Sports or BT Sports to watch the English Premier League, you witness a completely different class of football altogether and of course – their tip-top professional standard of quality presentation by the guest stars of the past who really know what they are talking about. The exception is Chris Mutton (sorry it should have been Sutton) – who is so biased towards Celtic and completely blinkered when it comes to Rangers that his daft opinions don’t really count with me anymore.

I am advocating that Rangers only sign seven or eight quality players at most, if Pedro cannot offload all of the dross. As I honestly feel that too many players can disrupt the tight teamwork that every good team requires to get better results, than a manager who is never sure of his best starting team.

If Niko Kranjcar can reach match fitness and plays to form, he will make a huge difference to Rangers next season and the same could be said about young Jordan Rossiter who looks like a top class player to me.

I wish our 46-year-old Portuguese manager Pedro Caixinha, our 16th Rangers boss, all the luck in the world at choosing the right players to sign for next season. I think he will need it after the amount of disastrous signings picked by Warburton over a two-year period.

Apparently Caixinha was the number one target for the Ibrox Board and Pedro, who most recently coached Qatar Stars League side Al-Gharafa, arrived with a decent reputation as a talented coach with great potential. It was also hoped that he would bring in Portuguese and Mexican stars to Ibrox and that is exactly what he has done.

The precious and hugely dedicated Rangers supporters fully deserve a successful team to follow and we will all back Pedro to the hilt with the hope that he does actually succeed.