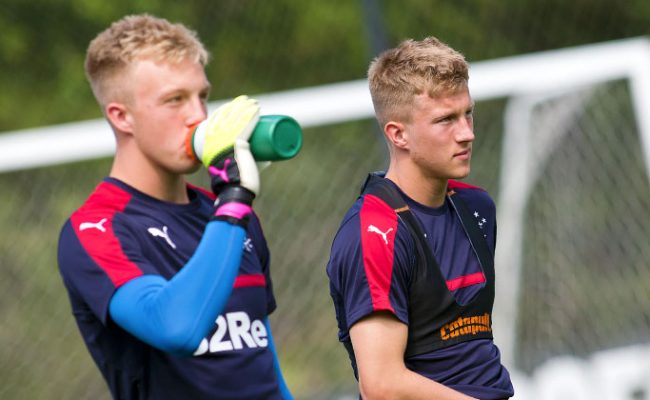 6’2” versatile defender  Ross McCrorie has recently turned 19 and can play so many positions from centre half to right back or could even win a place as a decisive, hard-tackling defensive midfield player.

He has caught the eye of Pedro Caixinha, his new manager, who really likes what he is seeing from the youngster and the boss has confirmed Ross will be an addition to the senior squad this season:

“We have Ross McCrorie with us and he has done very well and was fantastic at the Toulon Tournament. He will be one of our 5 CBs”

Ross McCrorie has worked his way through the Rangers youth system to become the captain of the U20’s side (when he’s not out on loan) playing alongside his goalkeeping twin brother Robbie McCrorie. What a thrill it must be for their parents and all the family.

On Feb ’16, 18-year-old Ross accepted the challenge of joining Ayr United on a-4-month-loan-deal until May ‘16, to play for the League One side and managed to play in 15 of their games and scored 2 goals. He had a big say in helping Ayr to win promotion.

“We signed Ross because he can play right back, centre back or in centre midfield. He is a defensive minded player who is quick and hugely talented. He has just trained with us today for the first time and he looked extremely good and goes straight into the squad for tomorrow.”

After signing a new Rangers contract from Dec ‘16 to May ‘19, he joined Championship side Dumbarton on 27 Jan ’17, to join up again with Ian Durrant, his former coach at Rangers. It was another 4-month-loan-deal and he played in 9 of their games until the end of the season in May ‘17.

That experience with Dumbarton seems to have stood him in good stead with Pedro Caixinha finally involving him in his first-team plans after suffering a head knock playing for his country in the Toulon Tournament semi-final loss to England.

That head injury ruled him out of any sort of action for a full week, and indeed, his first time back with a ball at his feet came in his first 45-minute start for Rangers in the 5–0 pre-season friendly win over Irish side Coleraine, which was played at the Rangers Training ground, and young Ross was thrilled.

“The new FIFA rules are: When you have a concussion injury, you have to abide by the rules, so it was a week before I could train again. The Coleraine game came a week after and the manager spoke to me the day before the game to ask if I would be OK to start the game.

It was so good to get in around the first team boys again for pre-season, and to get 2 starts was fantastic. He also started me against the Welsh, giving me the nod for the 1-1 draw with the New Saints. I’m delighted with that, and while I’m hugely disappointed with the end result, the 45 minutes I again played were great to get the legs going again.”

Ross came very highly recommended to Pedro from the academy coaches who were all enthralled with his ability and refreshing attitude, during all the pre-season games and training sessions.

The coaches were very impressed by his outstanding performances for the Scotland U19’s & U20’s and in the recent Toulon tournament, by helping Scotland to win 3rd place in the competition. He is held in very high regard at Rangers and is clearly earmarked for a long-term-career at Ibrox.

There is every chance that Ross could go out on loan again at some point of this new season, as the more first team exposure he gets the better. It is precisely what his manager wants for him. But given how much he has impressed those around him, he might even be knocking on the first-team door soon. If you are good enough you are old enough, and that is why Pedro promoted him to the senior squad.

That said, being regular first team starter for a Championship or SPL team if not Rangers would certainly be most beneficial for Ross to achieve his dream to eventually make it into the Rangers starting 11 on a regular basis.