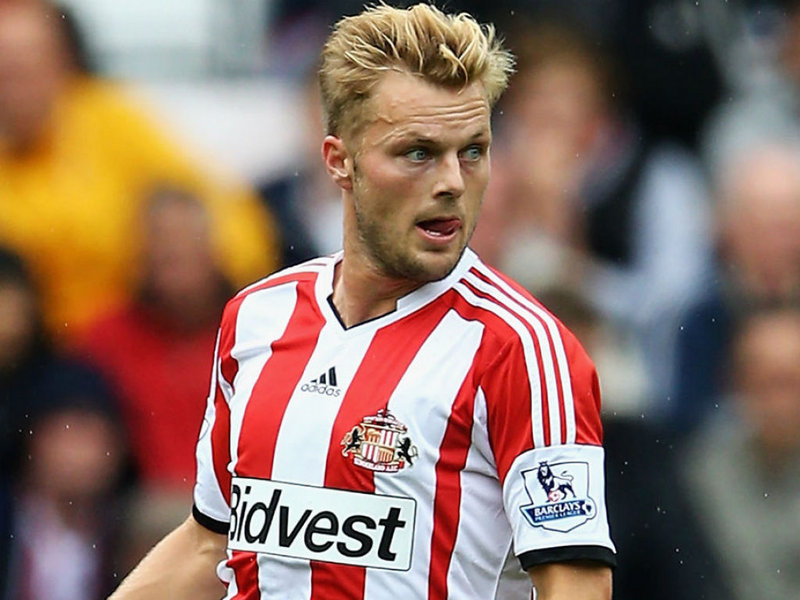 Sebastian “Seb” Larsson who just turned 32 on 9 June has just been released by Sunderland following their relegation down to the Championship, and now the 5’ 10” versatile midfield/winger star is available  on a free transfer.

Would this move be better than paying Norwich City £1.2m for Graham Dorrans or paying £1m to Hearts for Jamie Walker to play in our midfield? Or on top of them?

Seb has made 90 appearances for the full Sweden team since playing for them in 2008 and, looking past that ignominious name, here is a list of his impressive CV:

After beginning his career at hometown club IFK Eskilstuna, Larsson was signed by Arsenal. He made 9 appearances for the Gunners, before joining Birmingham City, initially on loan.

In season 2006–07, he played 50 games and scored 9 goals for Birmingham City
in the Championship year, when they won promotion into the Premier League.

In season 2008–9, he played 39 games and scored 1goal for Birmingham City in another Championship year, when again they won promotion to get back into the Premier League.

In season 2009–10, he played 38 games and scored 4 goals for Birmingham Cityin the Premier League and happily they managed to stay up for the following year.

In season 2010–11, he played 41 games and scored 5 goals for Birmingham City in the Premier League. Despite winning the Football League Cup 2010/11, they got relegated. Birmingham took the lead in the final at Wembley against Arsenal. Obafemi Martins scored an 89th-minute winner to give Birmingham their first trophy since 1963 in what the Daily Mail described as “the biggest upset at Wembley since Wimbledon beat Liverpool to the 1988 FA Cup”.

After being with them for 5 years, on 22 June 2011, Larsson joined Sunderland on a Bosman signing, linking him up with former Birmingham manager Steve Bruce, and was given the No.7 shirt.

In season 2011–12, he went on to play in 39 games and scored 8 precious goals for Sunderland which helped keep them in the Premier League.

In season 2012–13, he played 41 games and scored 1 goal for Sunderland in the Premier League, but the campaign was underwhelming on both individual and club levels as Sunderland just managed to avoid relegation.

In season 2013–14, he played 41 games and scored 2 goals for Sunderland in the Premier League. They were beaten in the final of the Football League Cup runners-up to Manchester City who beat Sunderland 3–1 in the final. He was given a new contract to run until June 2017.

In season 2014–15, he played 40 games and scored 3 goals for Sunderland in the Premier League. Larsson was named Sunderland’s Supporters’ Player of the Year for the 2014–15 season – quite an accolade!

The versatile midfielder/winger Larsson is renowned for being a set-piece specialist and a full international since 2008, and he played for Sweden in the European Championships in 2008 and 2012.

Just turned 32, Seb Larsson has a few years of football left in him, but perhaps not at the highest elite level, as evidenced by the fortunes of Sunderland last season.

However, his set-piece delivery is undeniable and he still makes regular appearances for Sweden, proving there’s plenty of life in the versatile midfielder.

A move for our very own Larsson could come with possible high wages, but if the Ibrox giants are to catch Celtic this season, they may want this tried and tested classy talent signing for the club on a free transfer.

It may not be as absurd as at first glance, because only 4 months ago on the 20th of February 2017, Seb was reputed to be £2.13m to buy him in Transfer Markt.

And the ‘Joey Barton’ fallacy stops almost any player (within reason) being a ridiculous link.

Pedro probably will not be interested, but we shall see.