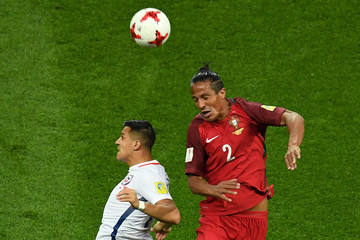 Article by: Ibrox Noise
Rangers fans have fond memories of Carlos Cuellar’s time at
Ibrox. Frankly the Spaniard was a colossal defender for Rangers, forming an
immense partnership with David Weir and operating at a level above what fans
were used to – his positional sense, strength, aerial ability and composure on
the ball were major contributors to Rangers’ incredible run to Manchester in 08
and the lad broke our hearts when he departed for Birmingham that summer.
It is safe to say Rangers have not really been embarrassed
by a plunder of riches in that part of the pitch since. Sure, there has been
Madjid Bougherra, Carlos Bocanegra and Dorin Goian – all internationalists and
all doing the Famous a decent turn. But none of them were exceptional at Ibrox,
not like at the level of Cuellar.

In Bruno Alves,  Pedro
Caixinha has signed a defender who is every inch the best stopper Rangers have
had since the Spaniard left for Villa, and it still beggars belief that we have
managed to secure a genuinely top class Portuguese centre back who has played
at every level, won the second biggest tournament there is, and who has easily
handled world class strikers throughout his career like Carlos Bacca, Paolo
Dybala, Alexis Sanchez and Gareth Bale.

Some have gone as far as to call him world class, and while
it would be generous to go that far, he certainly has operated at a level which
suggests it would not be the biggest stretch.
His display last night against the attacking might of Chile,
with their top class creative sparks from the likes of aforementioned Sanchez,
Vidal and Vargas just gave some idea of what Rangers fans can expect when he
takes to the Ibrox turf. He was huge in the air – dominating everything Chile
threw in, while strong on the ground and being in the right place at the right
time nearly every time.
This was a significant stage, and Alves handled it easily.
Cuellar left Rangers to get a place for Spain – he never even received a call
up and he was magnificent for Walter Smith. Meanwhile Rangers now have an
international veteran with plenty of experience of the Champions League, the
Portuguese Premier League, the Russian and Turkish not to mention world cups
and European Championships.
In short, Alves has the kind of CV the SPL simply is not
worthy of, and Rangers did a tremendous job prising him away from the sun of
Sardinia and glamorous Serie A locations like San Siro, Juventus Stadium and
Rome.
Instead he has Dingwall, Easter Road and Rugby Park to get ‘excited’
about.
But here he is, a Rangers player, and the first sign at long
last that Rangers have a defender of the highest quality.