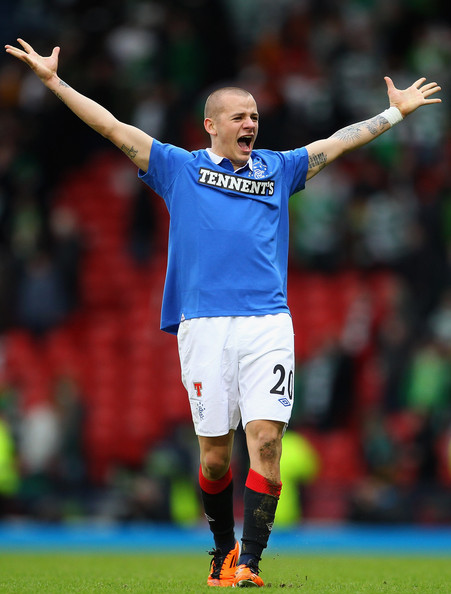 Slightly older Bears will remember the Alan Smith and Robbie Fowler ‘sagas’ of the day. Every single transfer window for about a decade, both of these were heavily linked with a ‘sensational’ switch to Ibrox, and every single transfer window one of them was ‘spotted at Ross Hall for his medical’. To say it got a little tedious is an understatement.

Well, it seems Vladimir Weiss is slowly but surely becoming the new Alan Smith or Robbie Fowler, with constant speculation in the press and among fans that Rangers’ ex-winger is in fact returning to Ibrox, speculation which ramped up when his own ex-manager Pedro Caixinha took the reins in Govan.

Weiss himself has certainly played up to the Ibrox galleries, with frequent pro-Rangers tweets since he left and regular attempts at winding up Celtic fans. In fairness to him, he is rather good at the latter.

But it is the teasing of Rangers fans itself which is starting to grate. For all we know, he really IS coming back to Rangers, albeit there would be more than a few tees to cross and i’s to dot before it happened, but the overriding problem is just how much Weiss is starting to frustrate supporters with this ‘will he won’t he’ soap opera.

Recently he tweeted ‘going home’ or something close, making fans think he was finally coming back to Ibrox, but it appears he was just going on holiday. Then he further stirred the hive winding up Celtic fans again with (admittedly accurate) accusations that they are ‘obsessed’ only serving to further muddy the ‘Rangers-returning’ waters. Again.

The bottom line is when Weiss was at Ibrox first time around, one good through ball aside, he was an extremely underwhelming winger. He really did not set anyone’s heather alight – instead false perceptions have been created thanks to his pro-Rangers Twitter stuff and it made him a cult hero who a great number of fans wished back in Glasgow.

That said his performances for his country Slovakia at last summer’s Euros were a stark improvement – a maturer Weiss was in evidence, with better use of the ball, a much more composed understanding of the game, and a much slicker performance.

Not quite Messi, you understand, but more impressive than he had been at Ibrox. So on the football basis alone, based on last summer, he would probably be an asset to Pedro Caixinha.

But we really need an end to this borderline taunting of Rangers fans – join, or do not, Vlad, and stop teasing us with cryptic nonsense that you ‘might’. You will be welcomed back by most fans if you do make the switch, but we only have so much tolerance for BS.