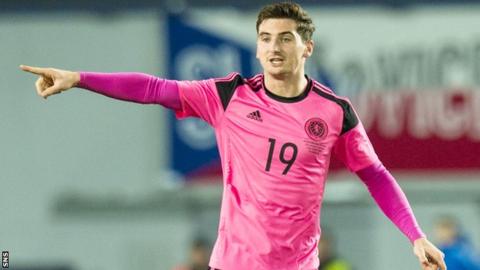 What does a young player do, when he gets released at an early age from Rangers? Well another 5 Academy players have departed the club this summer to play their football elsewhere.

Just turned 19-year-old midfielder Max Ashmore is moving to Ross County on a free transfer deal. It gives Max a new start to show the Dingwall club what he can do for them in the next few seasons.

Another young 19-year-old Birmingham born striker, Jordan Gibson, is available on a free transfer after being signed by Mark Warburton in 2015 and released from Rangers this summer.

“Jordan was a good spot by our academy scout in the Midlands. He is quick, has a trick and fits the new position-specific player profile we are developing with the manager for all Rangers players.”

However, it obviously didn’t work out as planned, as he was given a free transfer.

A 20-year-old striker or attacking midfielder Moroccan / Spanish Amin Bouzaig joined the Academy signing from Puerto Malagueno in Spain until May 2017. He came with big hopes but it just didn’t happen for him at Ibrox.

18-year-old left winger or left midfielder Sam Jamieson had a loan stint in the Lowland League with Stirling University, but it didn’t earn him another year at Rangers. He is looking forward to playing for another team next year. With this positive attitude, Sam stands a chance of being a success with a lesser team.

Young 19-year-old left-footed-versatile player who can play in so many positions Josh Jeffries, can be picked for midfield, secondary forward or left winger.

There are some players who take it on the chin and come back strong as they get older and improve greatly. Take the Hull City left back Andy Robertson as an excellent example of what can happen when you just get on with it.

He joined Old Firm rivals Celtic as a youth, but was released at under-15 level because he was considered too small. He was disappointed, but signed for Queen’s Park, and went on to play 43 games in his first season. On 3 June 2013, Andy signed for Dundee United and played 44 matches before Hull took him to the English Premier League, where he has been a big success and has 15 Scotland caps to his name.

Kenny McLean was released at 17 by Rangers’ youth team, then started his senior career at SPL club St Mirren. He went on loan to Second Division side Arbroath for the second half of the 2009–10 season, before returning to St Mirren and breaking into the first team at only 18. He moved to current club Aberdeen in 2015 and now he is considered to be a £1m player.

Kenny has represented Scotland at the under-19 and under-21 international levels before making his debut for the senior Scotland team in 2016.

Those 2 players are perfect examples of what can happen after you get released by a big club like Rangers. So chin up, keep very fit and make sure your attitude is right for whichever club you join. Listen carefully to your coaches, keep hold of your enthusiasm and always give 100% in every training stint and in every match.

For many, a change of circumstances and scenery can prove to be the fresh start that they need both on and off the park.

Always remember, some managers rate certain players and others don’t – it’s all down to opinions and they are not always right. And you never know, the club who released you by mistake might just bring you back years later.