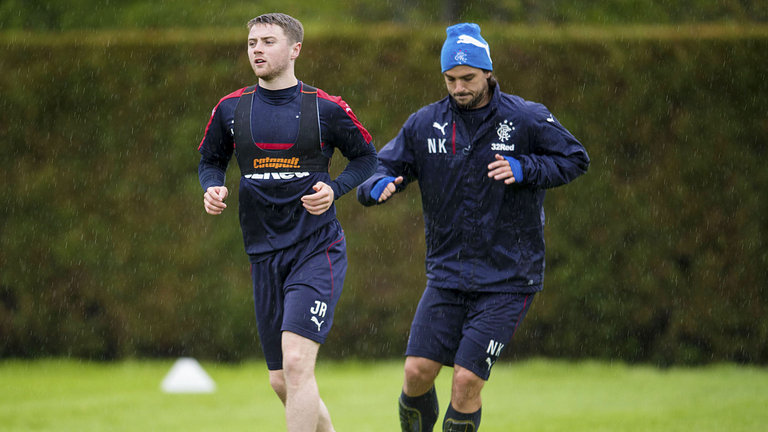 With an underwhelming season drawing to a much-needed end, thoughts have turned in earnest to next season and the changes needed at Ibrox to produce a more credible challenge at the top end of the table.

Already we have seen countless players linked with Rangers, with reports last night suggesting Aberdeen’s Ryan Jack was a done deal and manager Pedro Caixinha’s first signing for the new campaign. Indeed, Caixinha has subsequently moved to strongly big the Dons’ captain up, admitting he has scouted him and he hugely admires him.

But what of the existing squad? Many fans want it ripped up and started again; and who could blame them? With atrocities like James Tavernier, Martyn Waghorn, Joe Garner (yeah yeah he had a decent match against Hearts) and Michael O’Halloran blighting the group, it is no wonder a mass clear out is sought.

And yet there are three completely forgotten men in Rangers’ squad who have a serious bet of being part of a ‘new look’ midfield for next season, if, that is, all three can stay fit.

Jordan Rossiter, Niko Kranjcar and Matt Crooks are the intriguing three, three enigmatic puzzles to add to the Rangers equation that never really got any true chance to show their real worth, be it for injury or lack of favour, and, depending on how Ped views it, it is very possible all three could become critical parts of Rangers’ assault on the new campaign.

Rossiter’s career has been a stop-start injury malaise but then Steven Naismith had similar issues at a similar age at Ibrox – in reality he was out injured for more or less three years but finally gained fitness and became a massive component of the early part of the 2011 season. There is no reason a player of the quality of Jordan Rossiter cannot go on to have a similar impact next season – Caixinha is on record as seeing him as a big part of next year:

“Jordan has just started training again with the first elements of the session. He is clean. The imbalances are gone. It’s something for him to return to and have the confidence levels to be with the other guys. One entire season just seeing our physio Stevie Walker in front of him is not very pleasant but now he is returning with us and I hope he can start the season with us as well. Now that he’s back with the other players, even if it is only light work, it allows him to get the confidence levels, the rhythm and to be able to return to us for pre-season on June 5. He’s a good player so we are counting on him for next season. It will be like a new signing. With Jordan, Niko Kranjcar and even Lee Wallace, who has only played a couple of matches with us, we will restart the next season totally clean, which means it’s like new players are coming in.”

And as hinted, Niko is in there too. Kranjcar’s talent is undeniable. He is of the quality Rangers signed in yesteryear, if used properly. His vision and intelligence can be a huge asset to Rangers, with creativity a huge problem this season in his absence – like his colleague he is now completely fit again and ready to go and there is no reason why, if Rangers can keep him fit, he cannot become a huge player for the Club in the new campaign.

And last but not least Matt Crooks. Treated like absolute dirt by his ex-manager, then dumped out to Scunthorpe where he was showing his true worth before injury curtailed his season, the ex-Accrington man is a colossal player – a man-mountain who can surely do a job for Rangers. He just needs a bit of a chance and the belief from his manager. Maybe he will get that from Pedro, who knows.

Add the potential arrival of Jack and you would have to argue Crooks, Rossiter, Jack and Kranjcar feels a decent step up from Toral, Halliday, Holt, Hyndman and Windass.

But as with it all this window, time will tell.