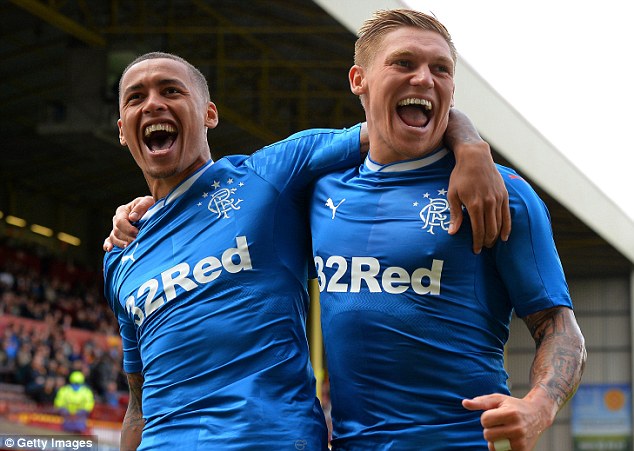 We learned a lot about Rangers’ squad and management today at Ibrox, arguably even more than in any previous match this season. Many fans would point to the Old Firm debacles as the barometers against which Rangers should be judged, and that is absolutely spot on, but today a unique set of circumstances transpired to give a new and valuable angle from which to measure this climate at Ibrox, and it does not make for impressive viewing.

However, two players stood out head and shoulders of ineptitude above the rest (Jason Holt also had a stinker but he has been pretty good by and large the past couple of months so we will cut him the slack), with respective performances of absolute mince and if Rangers are to move forwards and upwards from here on in, neither can play another minute in the Light Blue shirt.

I am of course referring to the diabolical James Tavernier and Martyn Waghorn.

It is evident now that fans have absolutely enough of these two, and few can fathom why they continue to heavily feature on match days.

If we start with Tavernier, his painful inability to defend is not just his Achilles Heel, it is his entire leg. Tavernier’s carelessness, his lack of concentration, his bewildering lack of positional sense and his general disdain for simply doing his job has rubbed enough fans up the wrong way and lost him every ounce of goodwill he ever earned. More than once today he lost the ball in an inexplicable farce, with at least one of those moments leading to near goals; thankfully his colleagues bailed him out.

If we are to be generous, the guy simply is not a right back and should not be getting played there – and yet every manager at Ibrox has selected him mostly in that slot. It is getting to be such a joke now that the short-lived joy of seeing Lee Hodson start at last was tempered by the selection of him at left back so Tavernier could continue on the right as usual.

James, thank you for your time but you can go now.

As for Waghorn… this guy had a decent season last year in the Championship, no doubting that, but the SPL is not the Championship. Everyone who arrogantly claimed the gulf between the Championship and the SPL was pretty small (Bread Man, I am looking at you) was patently wrong, and Martyn Waghorn is proof of that. His ineptitude as a striker was summed up near the end – bulldozing his way to a one on one against Noring, before a pathetic finish right at the Hearts stopper rather than sliding it to the left and giving it to the completely free Joe Dodoo.

Waghorn has been an astonishingly poor prospect this season, out of his depth in the SPL and he too is now free to pack up his things and head off.

Yet why do these guys play? Is there some mystery at Ibrox we do not know about that means both must feature heavily?

Ibrox Noise has been pretty patient, especially with Tavernier, but enough is enough. Much better is needed or it is top 6 at best next season.