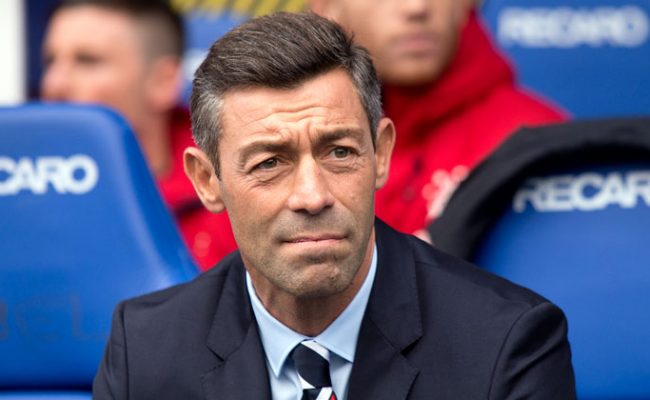 Well blow me if that was the not craziest 90 minutes seen at Ibrox in many a year. Picking through the chaos of Motherwell’s visit takes some doing, and I find myself flummoxed as where to even start, but I will soldier on regardless.

Let us get the bread and butter out of the way – the first half was possibly the most incompetent Rangers display seen at Ibrox since the worst of Ally then Kenny. Only premature finishing and lack of composure stopped the Steelmen making good on their ridiculous superiority.

The second half? It just became…madness. A back four of Andy Halliday, Jason Holt, Jon Toral and Rob Kiernan has to be one of the most bewildering sights I have witnessed at Ibrox in a long, long time, and “I defy anyone to say” (Loaf Boy eat your heart out) that the formation made an iota of sense. Put simply there was not one. On one hand the changes partially worked in that Joe Garner’s fine finish earned Rangers a point, but on the other it forced the clear conclusion that Caixinha is not scared to try radical things, both to the possible benefit or otherwise of the team.

The problem is Rangers fans have gone from one comical extreme to another. From one manager who stubbornly stuck to the same pattern game after game, insisting it would come good eventually (probably around the year 2025) to a new manager who is more than happy to throw dice and go into radical Crazy Street in order to turn things around.

I cannot be overly critical – Caixinha still does not have counsel to aid him in the workings of the SPL and Rangers – but when one witnesses changes like we saw today which basically put 10 attackers on the pitch backed up by one defender, you do have to wonder what kind of manager Rangers have now.

The performance against Hamilton was clear, succinct, outstanding in energy, execution and general succour and the quality of play was as good as anything we have seen at Ibrox in five years. Two weeks Pedro had to work with the players and prepare for the next fixture, and somehow he conspired to make a complete mess of the good start he had enjoyed with a frankly abysmal first 45.

It was not just the early goal, although Loaf Boy’s ghost lives on with Rangers’ staggering inability to defend set pieces continuing, but the general demeanour of play as well; Motherwell bullied the life out of Rangers, and simply wanted the three points more. But for stunning goalkeeping from MOTM Wes Foderingham, they would have made good on their superiority. They played neat, tidy, incisive, defensive-splitting football and cut Rangers’ backline open with embarrassing ease, while seeming to have an extra man getting to nearly every loose ball. And before anyone complains about them being ‘too rough’ – sorry, but this is supposed to be a sport for men, a contact sport with physicality. If they dish it out, you dish it back. Took until around 60 minutes before Rangers finally did.

Motherwell did not come to Ibrox to defend, and it showed and Caixinha admitted that at full time:

But then that second half – from a possible 4-3-3 formation in the first half (it just was not anything like the clarity of the 4-2-3-1 v Hamilton) it went to Bonkers Row as Ped made three drastic changes – essentially subbing off the entire defence aside Kiernan (seriously, what does the lad have on the management at Ibrox?) and replacing them with attackers.

No denying it, that second half’s attitude was better, and saw more attacking, but I cannot say the quality of play was radically improved – and again, for better finishing and the lack of some miracle saves from Wes, Motherwell’s repeated waves of attacks (which continued venomously in the second) would have yielded rewards. Rangers simply had no midfield – although with the chaos of the second half, it beats me who they were supposed to be.

Pedro explained it was down to injury as to why he made the spate of subs:

“So we tried to make two changes at half-time (to fix the first half). But we also saw then that both Lees were struggling – Lee Wallace wasn’t 100 per cent and tried his very best, and Lee Hodson arrived with a high fever, Clint also felt his hamstring. So we were forced not only to change the mindset but then change everything else.”

One wonders then why Senderos did not replace Hill, nor Halliday out to RB where he has played before (in his defence he actually did ok at LB). Or why Wallace or Hodson even started when neither could last 90. If you have no fit full backs, would a three at the back not be a better idea?

This was…a bizarre second match in the new boss’s reign, and I sincerely hope Caixinha learned a great deal from it. He now hopefully knows some extent of what you can and cannot do in the SPL, or at least has some idea, because any more afternoons like today’s from the new manager would pour worryingly quick cold water on certainty he is the right man, no matter what reasons he cited for the madness.

Wednesday’s trip to Rugby Park is critical already. We thought we might have turned a corner against Hamilton, but evidently the team remains a work in progress and that really was just ‘new manager syndrome’. With a loss of another two points to Aberdeen, second place is now starting to seriously look unobtainable.

I hate to say it Ped, but you are already under bit of pressure – but then you knew and expected that before you took the job, knowing that this was a club which ‘had to win’ – your words. Hamilton showed what you could deliver with the correct preparation and selection; that has gone sideways now.

Here is hoping you can right it.