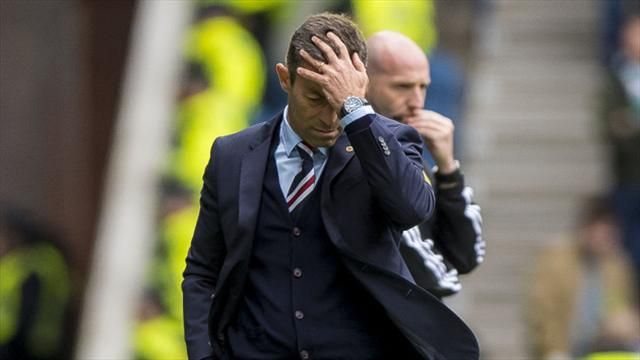 If you thought last Sunday’s shambolic first half at Hampden Park was bad – and you were right, you had to suffer an even more embarrassing situation at Ibrox yesterday in another one-sided 90-minute display. This time it was much worse with a resounding 1–5 demolition job on our own patch – totally demoralising!

In fairness, I don’t think too many of us were expecting a miracle result yesterday, coming so soon after only six days following the last outing to try and gain some confidence back into this easily-beaten Rangers team. It was left to Pedro Caixinha to convince his players that they could compete with an unbeaten SPL Celtic team at Ibrox, to warn his players not to stand off against this well-balanced opposition and to show the desire and passion missing from last week.

The game was all over for Rangers after only 6 minutes when referee John Beaton, in his first Old Firm game, had no option but to award Celtic a penalty after an extremely rash and naïve challenge by our young 18-year-old Maltese-born left back Myles Beerman who clearly brought down Patrick Roberts in the box.

It was completely unnecessary as the ex-Man City right winger was heading away from goal, but the Rangers players were advised to get stuck in and make their presence felt. Unfortunately, he simply misjudged his tackle and totally missed the ball and Roberts cleverly left his legs where they should be guaranteeing the penalty.

Patrick Roberts again roasted Myles Beerman throughout the match and made me wonder why Caixinha again chose to play him at left back this week, when he had failed so miserably at Hampden. Admittedly Hodson failed a fitness test and Wallace was still unavailable so Ped’s hands were a tad tied. However, he has only just turned 18 and hopefully he can come back stronger and has a good future ahead of him at Rangers once he gets more games under his belt. I am sure the experience of the last four or five weeks in the starting XI will help his long term Ibrox career.

The reason I wanted to play with three centre backs and two wing backs yesterday was to exclude Beerman from being subjected to further torture, and I will say it once again – Tavernier is not a good enough defending right back to play in our back four.

The first two goals were mistakes by our own players. Beerman’s penalty for the first and then Foderingham should have saved Griffiths’ shot for the second. It was the right height for our goalkeeper who got his hand to it but couldn’t stop it going in. Indeed, the keeper should have come out and cleared the ball for Celtic’s fifth goal from the free kick as it happens as well.

Brendan Rodgers has now proven that he is the only English Premiership quality manager presently featuring in the SPL and this might be what Rangers have to do to get back to competing against our fiercest opponents – sign that standard of manager – but that will cost a lot of money.

Since Walter Smith was our manager – we have had to suffer Ally McCoist (first time manager), Mark Warburton (was it a gambling experiment worth trying)? And now Pedro Caixinha (another huge gamble) by our skint board.

None of it inspires, from the board, to management, down to the squad.