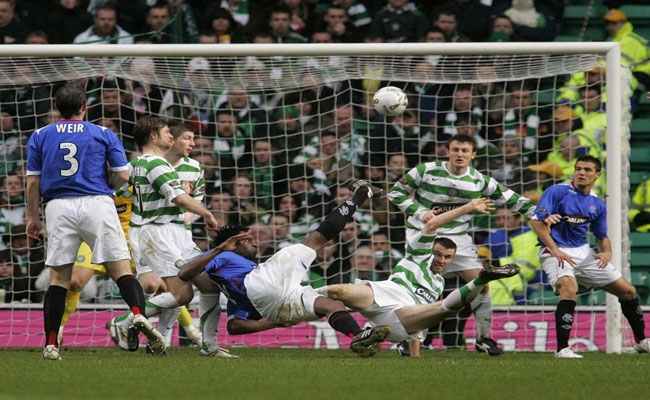 There will not have been a Bear who did not wake up to this morning’s tragic news with that vile, sickening, sinking yet horribly familiar feeling in their bellies. Ugo Ehiogu, who only 24 hours prior had been rushed to hospital in London following a deeply worrying training ground collapse, had been taken from us at the youthful age of 44, having ultimately suffered a fatal cardiac arrest.

Remembered forever for ‘that’ goal at Parkhead, Ehiogu was a massive part of the Walter Smith resurgence of 2007, a Rangers team who clawed back a humiliating 20 point gap to Celtic and made the final table look almost respectable.

Indeed though, when Walter had had the wisdom to sign he and David Weir as free transfers that January as part of his rebuilding job in Govan, most SPL rival fans laughed at Rangers signing ‘geriatrics’ in defence, two ‘old past-it washed up’ soldiers at 34 and 36 years of age respectively, and while Ehiogu’s time at Ibrox was fairly brief, few could deny the impact he and his partner made on shoring up Rangers’ diabolical defence.

Generally seen as a ‘gentle giant’ and the kind of man who would go without so others could have, Ehiogu was a truly loved individual who was popular everywhere he went such was his modesty, his class, his friendliness and his kindness.

But that sweet man off the pitch was a gladiator on it, as Rangers fans known only too well, not scared to put his body where it hurt to help his team and possessing that enviable ability to do something special to be remembered by.

When Rangers went to Parkhead that fateful day, no one gave them a sniff – and the performance was typically Walter – hard-working, gritty, defensive, but then late on that corner came in and as Ehiogu flew upside down the history books were written.

It is the goal he will be associated with into folklore, but he was so much more than just one goal – a true gentleman of the sport, his arrival at White Hart Lane in 2014 as U23s coach saw the rise of young Harry Winks, a player Rangers were desperately after recently till he broke firmly into the Spurs first team.

I am no expert on Spurs’ youth systems, but it seems more than likely Ehiogu’s wisdom would have played a huge role in the attacking midfielder’s rise.

But for Rangers fans he was part of that massive turnaround in 2007 – where a ramshackle Rangers became a formidable outfit and the Iron Curtain of he and Weir made, on the second half of the season alone, Rangers the best side in the country on form.

As Paul Merson said, only the good die young. And Ehiogu was more than good.

He will be sadly missed. Ibrox Noise’s sympathies, best wishes and love go to his bereaved wife Gemma, son Obi and daughter Jodie and all his family and friends.