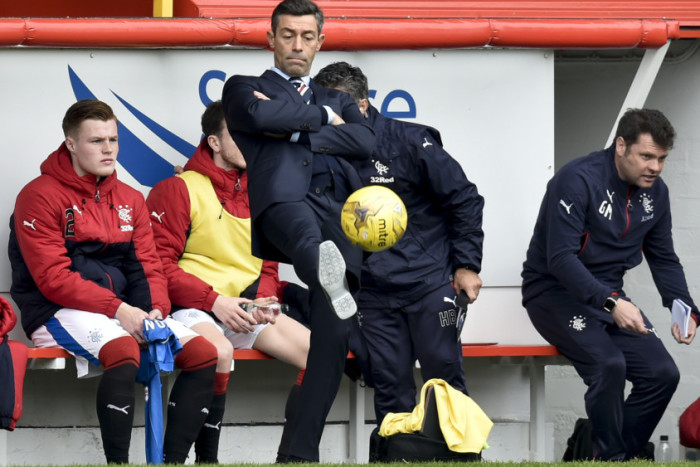 While the Pedro Caixinha regime is still fledgling, and arguably cannot be fully judged yet, the board nevertheless made a massive gamble with his appointment. Fans wanted McInnes, Wright, Souness, McLeish or indeed Frank De Boer to climb the marble staircase in earnest.

Instead, Stewart Robertson, Dave King and Paul Murray hoodwinked the lot of us with the most left-field managerial appointment in Rangers’ history by making Portguese Pedro Caixinha Rangers’ new boss in replacement of Loaf Boy.

However, as much caution as we all had about this unheralded 46-year old ex-Nacional manager, and still do, his record over the course of the first four matches of his charge make for staggering reading. And if we add the tail end of Graeme Murty’s ultimately impressive tenure, the following stat really does suggest the board’s huge risk may, just may be paying off:

In the past seven matches, Rangers have scored 17 goals. Now, that is impressive but not entirely alien to Rangers fans who got used to, in the early part of his predecessor’s reign, a hell of a lot of goals too. There are two critical differences which start to force some early semblance of vindication on the board’s part for picking such an obscure sword to risk themselves on:

1: The calibre of opponent is a massive hike over the St Mirrens, Hibernians, Alloas and Dumbartons that, early on, Loaf Boy scored so many against. The fact is now it is Hamilton, Kilmarnock, Partick Thistle and Aberdeen. In other words, SPL quality rather than lower SPFL standard.

2: The defence. Oh my goodness; in seven matches against SPL opponents Rangers have conceded a remarkable two goals. Just two. And Celtic scored one of them. Pedro’s reign itself has conceded just that one goal against Motherwell, which has seen the emergence of Danny Wilson as the toast of the fans in recent memory while two youngsters in David Bates and especially the increasingly-impressive Myles Beerman have staked a very serious claim for starting berths even when senior players are fit again.

While no one would say the standard is back to the Rangers of old, it is certainly a stunning start. Defensively Walter Smith’s teams were legendarily hard to beat – Rangers, right now, have started to cultivate a little bit of that steel again, and you have to argue Caixinha’s 4-2-3-1 formation is working very well indeed.

Thistle may have been cultured and composed at the weekend with 51% possession at the half hour mark, but they were miles off being threatening and Rangers ran out comfortable and deserved winners with two goals and none in reply. That is the kind of robustness Rangers’ defence has lacked quite simply since 2012. Since the quality of player went from Carlos Bocanegra to Emilson Cribari in the matter of a month. While I will not scale the nonsense of saying our defence is as good as it was five+ years ago, it is certainly the best it has been since then. By some distance.

Although that would not be hard, would it?

Will Clint Hill and Lee Wallace simply waltz back in? In terms of performance and form, they should not; it is that simple. But Wallace is the captain and it would be a difficult decision to drop the captain in favour of a relative rookie, even if Beerman has been a revelation. As for Bates, he is still a little rough around the edges but optimistically he is a significant upgrade over Rob Kiernan, and at the least generous is absolutely no worse than him, but many would still argue for Hill back alongside Wilson regardless.

But whether it is Hill and Wilson or Wilson and Bates, Rangers’ defence has only seen two goals shipped in six weeks. That bodes exceptionally well for the long road ahead of us.