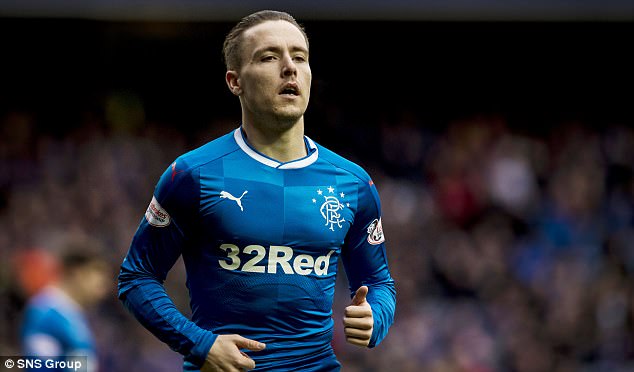 Pedro Caixinha faces a number of key puzzles to solve before his men take the Hampden turf on Sunday, but one of the biggest talking points is the future of Barrie McKay; dropped unceremoniously for the trip to Pittodrie, McKay’s display at Ibrox when reinstalled for the visit of Thistle was enough to make his manager hook him at half time, amidst the contract talks and general lack of form the young winger is in.

To call McKay’s performance for the first 45 ‘poor’ is generous, such was his wayward passing, lack of running, and general lack of apetite. The young man is a favourite of Ibrox Noise, charting as we have his rise from breakthrough youth in 2012, to rejected outsider in the intervening years, before returning in glory under Mark Warburton to become Rangers’-then prized asset.

Unfortunately the Loaf’s departure has seen McKay’s head go down, and reports of his disinterest in training certainly have not helped; rumours McKay would easily dismiss with performances in matches under the Portuguese.

Sadly the weak show he put in against Partick was enough to make his manager haul him off in favour of Dodoo, who made his longest appearance for some time as a result. So the big question now is does Barrie McKay have any role to play in Sunday’s monumental clash at Hampden or is his form too poor to warrant a start?

I wish to avoid the contract stuff – McKay may be happy at Ibrox, he may not – he may have rejected ‘a first offer’ (despite it reportedly involving a very generous pay rise) or he may genuinely wish to leave; that is not for me to conjecture.

But his form is; and McKay has been a rank underperformer ever since the Loaf left and the Ted turned up. It is disappointing for everyone; Barrie has all the tools to develop and become a fine winger for club and country, but right now his form is extremely off colour and if Jason Holt, Myles Beerman and Danny Wilson have bloomed under the new regime, McKay has definitely wilted.

Rangers are better off with McKay at his best and his heart fully in the task at hand; we know just how devastating he can be when he produces what he is capable of.

But right now Pedro Caixinha has a call to make; trust the 22-year old to deliver on the big stage, or look back to the last Old Firm match and his-then uncharacteristically poor display at Parkhead as evidence of what he might be like if selected again.

That said, if McKay wants to show his head is in the game, Sunday is the perfect showcase. This time last year his staggering goal helped to beat Celtic.

Here is hoping he is in that place again come the end of the week.