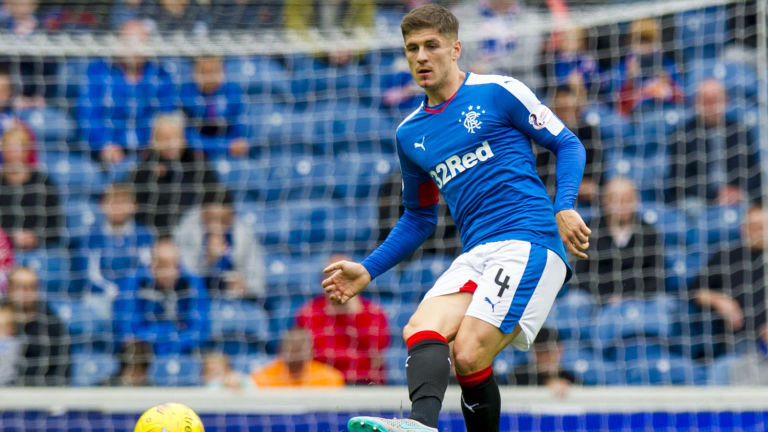 If one thing has been consistent over the past year, it has been Rob Kiernan’s general ineptitude. While the colossal 26 year old stopper has had his moments of impersonating a decent defender, by and large he simply has not cut the mustard in Rangers’ colours, whether in the demanding SPL or the more forgiving Championship.

Of late, he has served his ban and the Clint Hill Danny Wilson partnership has excelled in his absence, with arguably Rangers’ finest defensive display in many a year against Celtic last month. This was followed up with a solid robust showing against Hamilton during the last outing at Ibrox, so does this make Kiernan a busted flush in the eyes of supporters who used to give him a heck of a lot of slack?

There is no denying Rob has the attributes to actually be a truly exceptional defender. He is big, strong, brave, and plays the game with the right spirit. He is also surprisingly agile on the ball, showing some footwork which would not be out of place at the other end of the pitch; who could forget that feint which did two Celtic players including Leigh Griffiths last April at Hampden?

But unfortunately for Kiernan his general Rangers career has been plagued by the majority side of his game; woeful reading of the play, shocking timing in the aerial leap, an inability to deploy his strength consistently against weaker opponents, and a bizarre failure to ever header with any conviction.

For the early part of his time at Ibrox, Kiernan got away with his failings repeatedly with his partner Danny Wilson always taking the heat from fans who just could not see Robbie’s weaknesses, blaming Wilson for every defensive lapse going, and indeed my colleague Richard Fillingham is strongly opposed to Wilson and would sell him ASAP.

Yet I refused to subscribe to this, never wavering from my belief that Wilson is a very decent stopper who ended up covering from Kiernan on many occasions, and whose own game occasionally suffered for this workload – and now that he is getting help from the leadership qualities of Hill, is forming a very durable partnership with the former QPR man.

So where does that leave the ex-Wigan man in the grand scheme of Pedro’s vision? I stand by my assertion that it is a tabula rasa for all players under this new management – be it Joe Garner, Jason Holt or Rob Kiernan, and every one of them is capable of a new lease of life.

Moreover, central defence right now is clearly working smoothly and surely Caixinha would be unwise to fiddle with it – and bringing Kiernan back from the cold for today’s visit of Motherwell would evidently qualify as such.

But for all the fairness I want to give Kiernan, I have rarely been convinced by his abilities and would be undeniably disappointed if I saw him in our shirt ever again – it is my belief he was not good enough for Championship Rangers and by obvious conclusion is miles off the standard required for the SPL.

But I have been wrong before. We shall see if he proves me such again.