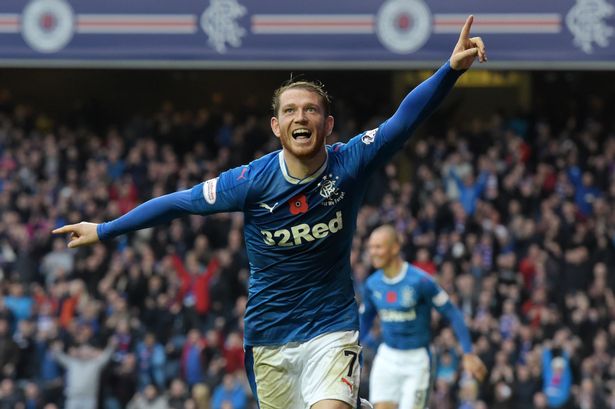 Rangers were delighted to announce last August that 28-year-old, Preston North End striker Joe Garner had finally joined the Teddy Bears on a three-year-deal after being head-hunted as the man to score goals and help us to challenge for the league title.

The Blackburn-born 6’ 1” (1.85m) forward was thrilled to try a different phase in his career, by trying life out in Scotland with a giant club like the ‘Gers who have such a grand history to their name.

Garner was Mark Warburton’s most expensive signing for a reputed £1.8m and was so proud to be presented to a full Ibrox crowd at half-time of the 2-1 win over Motherwell.

Warburton thought he was signing a fox in the box type and a livewire who will run in behind defences, and who was exceptionally good in the air while getting stuck in. Well he does get his retaliation in first (!)

“I’m over the moon, obviously it’s taken a little while but we’ve got everything sorted now. I’ve signed and I’m just looking forward to getting out there. I think everyone knows it’s a massive, club and it’s a great challenge for myself. The pressure that comes with playing for the club, the expectation is massive, and hopefully I can deliver. I’m confident in my own ability and there are top players here. I can bring goals and I don’t mind playing up there on my own and bringing others into play. Hopefully I can create some chances and score some goals. I’ve spoken to the manager quite a few times in the last couple of weeks and I know he’s very thorough and very professional in the way he goes about the game. He knows how I play and I’ve played against a lot of his sides before in the past. He plays his own way of football and hopefully I fit into that.”

If we take a look at his past career and stats though, does the lad fit into Rangers, and do his previous achievements bode well for life in Glasgow?

Garner started his career at Ewood Park as a trainee with local side Blackburn at only 17-years-old, and was soon loaned out to Carlisle United. After a successful period playing in 17 games and one as a sub, he scored 5 goals to show he had the potential to be a decent striker. He took a gamble, left Blackburn and signed for Carlisle for £140K. He played 34 games, scoring 14 goals in the process.

A year later, Nottingham Forest offered Carlisle £1.14m, which of course they accepted and in season 2008-09, he made 30 appearances for Forest but scored only 8 goals in his first season, playing against much better defenders than he was used to. Season 2009-10 was much worse when he only managed a paltry two goals out of 21 matches.

On 21 July ’10, Joe accepted a six-month loan to Huddersfield and featured in only 10 first team and 8 sub games with not a single goal scored.

Joe signed for Scunthorpe on an end-of-the-season loan-deal, and the result was a little better, as he played in 17 games and one as sub and scored 6 goals.

In season 2012-13, Joe started the first 3 games for Watford before being dumped back to Carlisle on a 4-month-loan deal. After playing in only 18 matches and scoring in 8 of them, low and behold Preston took Garner back to sign him on the 08 Jan ’13.

His move to Ibrox appears to have been a good bit of business for the Deepdale side, especially when Rangers paid far too much for his services. Joe played in 151 games and scored 57 goals, which is one in every three games.

Having read his goal-scoring record, IbroxNoise.co.uk wonders why did Warburton want to pay so much for Joe’s services? What do you guys think? Does he have a future under Caixinha or does his career record suggest he won’t succeed here?