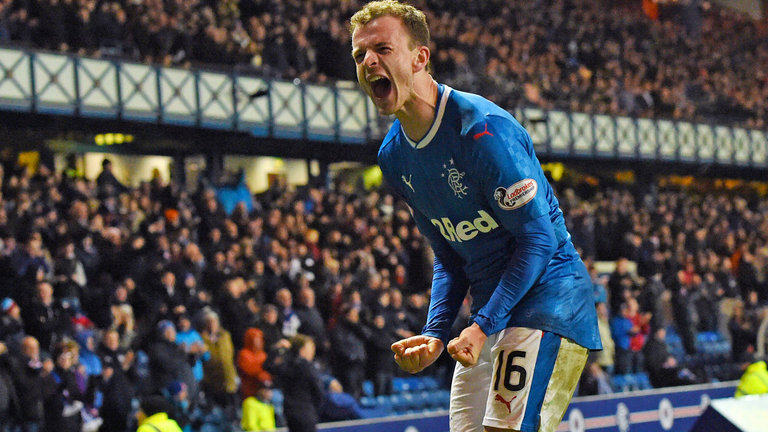 If one Rangers player has divided opinion among fans over the past year or so, it is Andy Halliday. Widely loved in the beginning due to his obvious love for the Club, Halliday inspired the phrase ‘One of Our Own’ to describe a fellow fan breaking into the Club he loves and becoming a major player.

However, as time has gone on, Halliday has come under a little more scrutiny, probably not ironically helped by his support for Rangers. The more off days the midfield anchor would have, the more outrage it would spawn, with constant accusations that he gets off lightly with poor displays. Because he is ‘one of us’.

There has to be a little bit of common sense. Halliday has not played his proper attacking midfield role at Ibrox for any serious sustained time. Yes, he got a little stint there when Tottenham’s Dominic Ball slotted in the holding role last season, but overall the ex-Bradford man has sat in the defensive zone in front of the back four his entire spell at Ibrox and consequently out of position.

He has had to learn a role unfamiliar to him, and the harsh reality is for all he praised his ex-manager recently, the Loafy One failed miserably to deal with the DM problem, instead just lumbering Halliday in there instead.

“I will take this time to obviously praise Mark because I’ve not had a chance myself personally to talk about it but clearly we had some unconvincing performances, some inconsistent results and the previous manager left in uncertain circumstances. The players never really knew what was happening and I’d like to just take this time to say Mark did a fantastic job. He came in and he got us all together.”

A bit of a contradiction to say he did a fantastic job and yet the performances and results were not good enough; but nevertheless, these comments about an ex-boss who has become utterly toxic to the support will not go down terribly well with them.

One could argue he is even angling for a move to rejoin the former Brentford boss at Forest, but the following comment pours cold water on that one:

“In my opinion the only way is down once you leave this football club so it’s up to us to try and stay here and fight for our place.”

By his own admission, Halliday is not interested in leaving, but his performances of the past year or so have done little to ingratiate him to fans who doubted his worth. But, again, you must accommodate the mitigating circumstance of his being out of position most of that time.

He divides the support, and has probably used up most of the goodwill afforded him by his own love of the Club – Andy, like the rest of the squad, has a new manager to prove himself to. If he can force his way into the reckoning and show he has value, Ped the Ted will surely take note.

With Rangers’ new 4-2-3-1 system Halliday would be less vital as a DM, given how Caixinha deploys it. The ex-Livie attacker might just get a new lease of life anywhere else in that new-look midfield.

But, as with it all, time will tell.