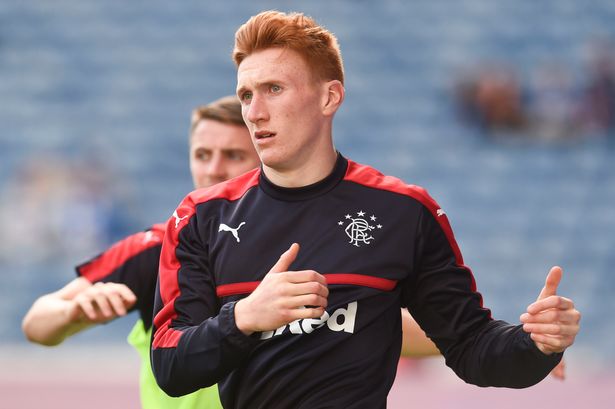 Article by: Richard Fillingham
I would like to highlight a situation that happened before the Rangers U20’s 1-0 win over Kilmarnock. The match was played at Murray Park, (or is it still called The Rangers Football Centre these days) on Tuesday 28 February, and our last signing, 6’ 4” centre half David Bates was placed on the bench as a substitute and seemingly deemed not good enough to start the U20’s game. Two subs were brought on (Abaradan 45’ + Atayaki 65’), before David was brought on late in the game and scored Rangers’ only goal.

He caught the eye at the start of last season when he broke into the Raith Rovers side and the tall Fifer did enough to win himself a deal at Kirkcaldy. Rangers were tipped off about the potential of the 20-year-old Bates and after impressing Warburton and Weir, on a 6-month development loan deal at Ibrox, they decided to sign the highly-rated defender from Raith Rovers on an 18-month permanent deal in January 2017.

Gary Locke, his manager at Starks Park was quoted as saying,

“If a young footballer at the club, who has done well, gets an opportunity like this, I’m not a manager who is going to stand in any young player’s way. I want to keep our best ones here, but when the likes of Rangers come along and want one of your players, inevitably they are going to get them.”

David won the club’s young player of the year award last season. A richly deserved reward for all his consistent performances.

Bates spent the first half of the season with the Gers’ U20 side and obviously he showed more ability and the potential to be a better player than they already had on their books and in their U20’s set up.

I had high hopes for David to break into the first team as it is by far the weakest part of the team. The fact that he can play right-back and centre-half is an excellent situation as that could lead to a new manager using him on the right-hand-side of a back three and Rangers playing with two wing-backs.

I am fed up watching Tavernier and Wallace being caught out of position, getting too far forward and losing too many goals from the speedy danger of the opposition attacks that destroys our defence by getting down the wings and getting their crosses over to score the goals against us.

This is an extremely trying period for all our loyal and lifetime fans throughout the world, but we MUST support Rangers through thick and thin. We also need the board to try and do the right thing and if they don’t really have enough money, sell the club to someone who has.

The amount of average and downright under-achieving players already in the first-team-pool is astounding. They don’t even know how to fight for the 3 points, especially in the away games. Is it turning out that I was wrong, that Bates is in fact just another flop signing to add to so many of Warburton’s other disasters?

Let’s hope this is one he got right.