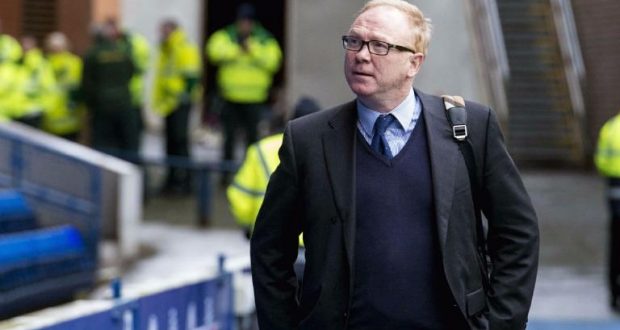 If today’s hard-fought victory over stubborn Morton taught us anything, it is that it will take a fair while for any new manager, likely Alex McLeish, to imprint their philosophies on a squad which has been borderline programmed into playing the way it does.

The majority of this squad has known nothing but Warburton’s generally impotent 4-3-3 tiki-tika for the past 20 months, and that psychologically has been completely imprinted onto the players’ DNA in a way today’s win demonstrated.

Even with their former manager just a memory now, the picked XI played exactly the same inefficient way they have since 2015, with the same incoherent defending, overpassing around the box and tactical approach.

Sky Sports’ Neil McCann was critical of substitute Michael O’Halloran for not utilising the flanks and space, and instead coming inside at more acute angles. And the man was making a valid point. Unfortunately the portion he forgot is O’Halloran, like the rest of the squad Warburton assembled, has known nothing else for approaching two years, and this dysfunctional autonomous squad badly needs WD40 and a few new cogs, otherwise it will just keep on playing like this.

In short, Rangers’ next manager has to completely re-write the code of this Rangers squad from the ground up to change how they play. And that will take some doing – Uncle Walter worked miracles doing it in 2007, but, as much as Rangers fans respect Big Eck, he, like most of the other mooted candidates for the vacancy simply are not Walter Smith and fans will have to account for that.

To put it simply, whoever comes in will need more time than Walter did, because they have a misfiring circuit to completely rewire with existing components.

Mark Warburton made an absolute mess of this Rangers squad – looking at how Andy Murdoch quietly dominated the midfield from deep today and broke repeated attacks through the middle up shows just how better off Rangers would have been to have kept the young man – he has toughened up and has benefited from maturity, and his release was just one of many mistakes Warburton made with his misguided belief he knew better than everyone else.

I for one will give the new man a good couple of months of completely free time. He will need eight weeks to reshuffle this pack into a more effective Rangers unit, and hopefully that will give him the time to assemble a system which is much more Rangers. Maybe he will need more time, maybe he will need little, but it is fair to give him the space – and maybe second place is beyond us too, such is the damage inflicted by the previous regime.

But as long as I see something resembling the Rangers I know and trust, something which fights for every ball, which uses it efficiently, and which honours the jersey, I will cut plenty of slack.

That said, if Eck, or whoever, manages to sort it all out before the next fixture, I sure will not mind that either!