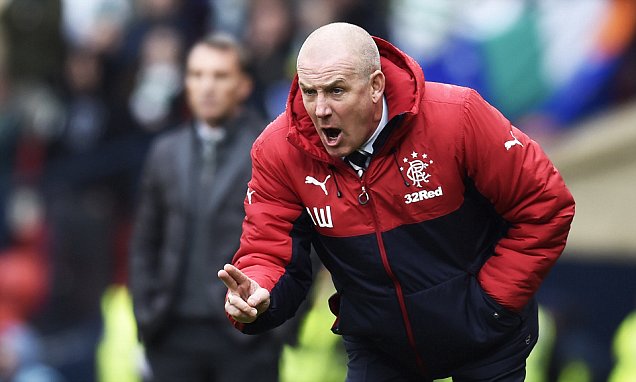 But that said, there can be no trivialising the current state of affairs either. While Rangers are always only ever one loss away from a crisis, season 2016/2017 has been as turbulent as any I can remember.

One wonders where this pickle actually began. It seems to be a domino chain of events interlinked which appear to have brought us to the precipice of Mark Warburton losing his job, one way or another.

This site has taken dog’s abuse for pointing out Warburton’s failings over the past eight or so months, and is now depressingly vindicated for it by other sites and the support in the majority finally catching on and saying the same thing.

Where did it actually start? For yours truly it was September 22nd 2015. Warburton’s first encounter with SPL opponents, the form of St Johnstone. For the first time at Ibrox under the Hat, Rangers’ tiki tika was completely useless and a canny Tommy Wright out-thought his opponent. As a dress rehearsal for life in the SPL, it was an unmitigated disaster, and said manager has still never lost to Warburton in three clashes.

It also gave SPL sides an insight into Warburton’s one-dimensional nature, that he could not or would not adapt his system to combat better sides. Think about Uncle Walter – in most bread and butter SPL matches he used 4-4-2. But when the big European matches appeared or Celtic or even Aberdeen came calling, he was more than adept at switching to a tighter defensive formation. Indeed, fans would often ‘laugh’ at the man starting six or even seven defenders for the marquee matches. But far more often than not, it worked.

Warburton? Flat and slow against everyone with next to no variation and it has absolutely cost on the step up, with no evidence he has anything else up his sleeve. And with recent results and performances verging on the ridiculous, it is evident that the rot which this regime has flirted with over the past half a year or so, beginning with the management, has now spread to the players and fans and there is little doubt Rangers are in a very bad way.

Here is a stunning stat for you compiled by my colleague Greg Roots:

Of all teams in the SPL who have scored more than two goals in a league match:

Correct – Rangers have scored three or more goals only once in a league match this season. Only Hamilton and Kilmarnock are worse than Rangers.

Something is inherently wrong and it appears now the majority of those Rangers-connected have cottoned onto this; speculation of a replacement for Warburton has been rife on the wires in recent days with the De Boer brothers, Nigel Pearson, the aforementioned Wright et al being among the mentioneds.

What is for sure; with an online poll elsewhere recently confirming two thirds of Rangers fans want rid of Mark Warburton, it is not a matter of if, but when he goes. All that needs rubber stamped is the finer details.