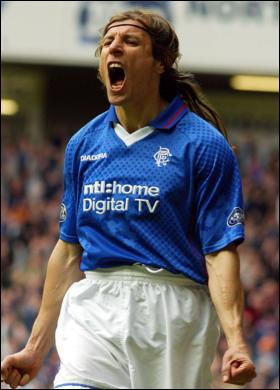 Remember Claudio Caniggia? It is a fair bet a great number of readers might not even know that name, or may only vaguely recall the era in which he played. As older Bears definitely will know, he was part of the last time Dundee beat Rangers, scoring in a 0-2 win at Ibrox in 2001, before he himself became a Rangers player not long after.

Rangers were in a bad way back then, with poor form blighting the end of Dick Advocaat’s reign as players like Craig Moore, Stefan Klos, Barry Ferguson and Tore Andre Flo struggled to cope with a resurgent Celtic under Martin O’Neill.

Oh what we would give for those kinds of problems today.

Yesterday Rangers found ancient history repeating itself as Dens Park’s finest outwitted, outfought, outmuscled, outplayed and plain outclassed an absolutely ghastly visiting Ibrox side, which appears to be careering headlong into something of an abyss, with Hartley’s outfit the latest to claim a blue scalp which gets less of a prize with every passing week.

To call Rangers horrible right now is an understatement, and yesterday’s abysmal loss left Graeme Murty’s ‘side’ (this is barely a team at present) six points off second place with Celtic now 30 points in the distance.

In my lifetime I do not ever recall Rangers being this far behind their Old Firm rivals in any season. There have been bad seasons with gaps close to 20 points, yes, but this is a new level of horror, and the fact Derek McInnes’ efficient Aberdeen with their vastly inferior budget are clearly superior on the pitch too rubs salt in the increasingly gaping wound.

To call this Rangers is simply wrong. This current shambles is not anything like a Rangers any of us recognise and each passing week that we witness more embarrassing chaos from the men in blue the more we yearn for something to believe in again.

The signs were already bad from before a ball was even kicked yesterday. First that absolutely vile starting XI. The Warburton clique crew were in full effect as Murty basically chose all the failures who have made this season such a disaster. Claims were made in the media that it was a change of formation too, but the official site was deliberately silent about this, identifying only the ‘attacking 6’ in front of the defence.

And while the formation did look a little different, it was even more disorganised, and I am in disbelief it has taken eight months for a pundit to actually articulate the issue, as Neil McCann did:

“I’m not sure about the formation being 4-2-3-1. Unless it’s fluid and players are being more dynamic and switching places…I don’t know.”

I don’t know. That quote was a slight paraphrase but Rangers basically have no formation. Once those players go out there, the front six get fragmented and it is anyone’s guess as to what the hell the system is. One minute it is 3-3, then it is 4-2, then 3-2-1-2…or something.

And while there was certainly a little sign of a shift in tempo, with attempts to get the ball forward a touch quicker being evident, the inability to conjoin a coherent passage of play or to create any meaningful openings at all (Forrester’s miss aside) was a symptom of picking all the horrors that the ex-manager signed. To watch the same old stale rubbish masquerading as Rangers players was an affront to decency, with no attempt by the interim coach to switch personnel and try something radical.

Then the current coach rubbed salt in the wound – pre-match he explained that while they would try to stream the ball down the lines faster and use it more efficiently, it was still about dominating the ball. Why? Why is it STILL about doing what does not work?! Winning is what counts, playing half decent football is a bonus but this absolutely hysterical obsession with continuing Warburton’s utterly hopeless philosophy borders on insanity.

Insanity is defined in modern culture as doing the same thing over and over and hoping for a different outcome. By this definition, Rangers are insane right now, and Murty’s bewildering selection of the always hopeless Rob Kiernan was almost like a sympathy vote to the boy.

Sometimes words do not cut it. And this entry feels just like that. I apologise for failing to really articulate what I feel. Yesterday we saw the latest low of an absolutely ghastly Rangers era, one which does not seem to want to go away.

Is this how it is to be till a new manager finally changes things? Or knowing our luck, will a new boss just do all the same stuff the old one did?