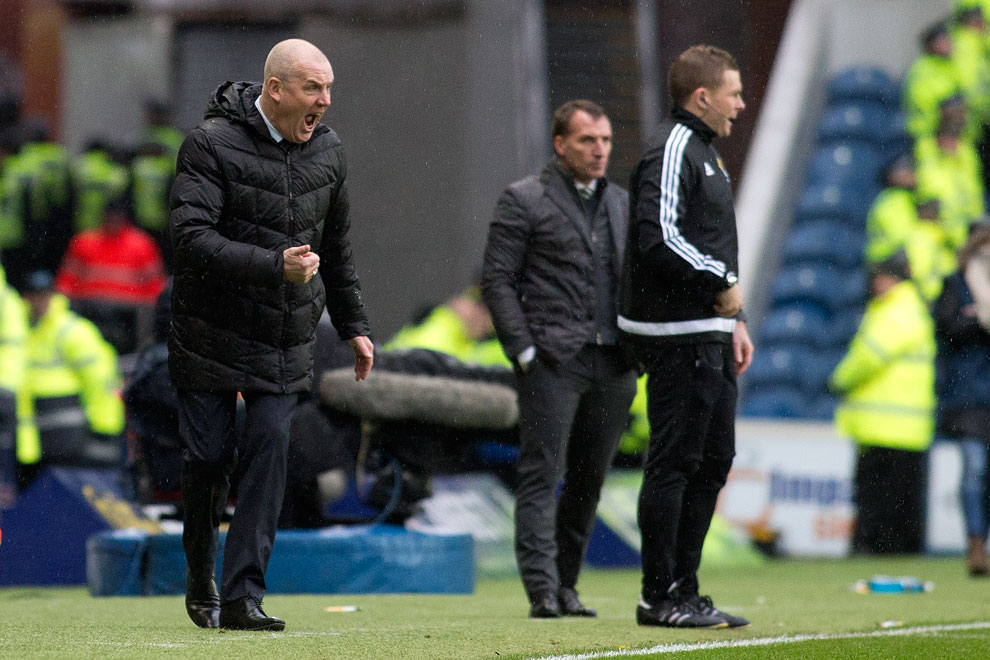 There comes a point in all walks of life when persistence gets eventually considered futile and insanity takes over. Insanity is often defined as doing the same thing over and over again, and expecting a different outcome, and while this Mark Warburton era at Ibrox does not quite fit that, it is far closer to it than any predecessor.

Mark Warburton has now gone beyond that point.

This site has swayed more than a few times regarding the gaffer – we called for his head a number of weeks ago following the Tynecastle debacle, and then mellowed when the man put together a run of two impressive displays against firstly Aberdeen then Hearts. We retained our doubts, but he had earned some slack.

Three weak displays later and we have to call it – Mark Warburton does not work as an SPL Rangers manager, and never will. Anyone who cannot see this is blind to reality – fair enough if this pattern ceased after a couple of months of life in Scotland’s top flight, but we are at the midway point now and it just keeps on going with no sign of progression.

Oddly enough, every Rangers fan I have ever spoken to ‘in the real world’ agrees now that Warburton is the wrong man to go forward with – all the opinions backing him are based in social media online or Internet forums, as if there is a strange ‘other wordly’ culture on there which does not apply to real life.

Mark Warburton was the right man to get Rangers promoted – he was secured for that primary purpose and he achieved it splendidly. Unfortunately the progression stopped there. If anyone requires ‘hard evidence’ that he will not take us forward, one only has to look at the two summer transfer windows since he took charge. Summer 2015 saw him revamp the whole squad with solid players who did a fine job in the Championship – the Waghorns, the Hallidays, the Holts, the Foderinghams; that was why he came to Ibrox, to build a team equipped for promotion.

He succeeded. But then we fast forward to the following summer and the signings designed to ‘make Rangers competitive’, (Warburton’s words not mine) – only two of them have become regulars in the starting line up; Hill and Garner (the latter still not truly convincing as a striker). None of the rest, for injury, poor judgement, or just not being a Warburton pal, have managed to get their foot in the first team door consistently. Sorry, but of 11 signings, for only arguably one, maybe two to be a success is absolute failure.

And that was the team built to handle the rigours of the SPL. Are Rangers atrocious? By Rangers’ normal standards, absolutely. To be 19 points behind before Big Ben sounded is disgusting and any Bear who accepts that standard is a sad indictment of how standards have fallen.

Did Rangers expect to compete with Celtic? No chance. But the second top budget in the country is nowhere near being delivered on the pitch. 21 matches, 11 wins – and only two of those non-wins were against Celtic.

Yesterday another football lesson was delivered by Brendan Rodgers’ embarrassingly superior outfit. Rangers did start well, and for the first 30 minutes made a match of it while Celtic barely showed up. But once Dembele’s rocket flew in, there was only one team in it and as usual Warburton was completely out-thought thereafter, with all the usual rubbish and predictable substitutions.

Some fans will point to Miller hitting the post and Forrester blowing a colossal chance as a way of pinning all the blame on the players. True to an extent. But what do they make of Dembele hitting the post and bar and Sinclair missing an open goal? For all the chances Rangers wasted, Celtic wasted double or even triple them. So it just is not an argument which holds any water.

It was put to me Rangers’ players lack composure under pressure – cannot make decisions when they count – absolutely spot on. The players are evidently not up to the task of playing for a worthy Rangers. But neither are the tactics.

Warburton could win 10 games in a row now and it will not change a thing. He is not the right manager and does not sign the right players – nor does he play them or use players in their correct slot (why did he sign Crooks, again?). The number of fans increasingly irritated by both his stubborn refusal to admit he is wrong and his equally stubborn inability to read a game and change it is bordering on depressing.

Only once do I ever recall Warburton seeing what was wrong in a match and fixing it, turning it around via a change in system and managing to win the match. That was when his predictable tiki tika was not working and he finally went route one aerial as a late Martyn Waghorn header put away Queen of the South at Ibrox last season – 17th of November 2015.

But his overall record since April last year absolutely reeks. Rangers, under his guidance, have managed three good performances – again, the Killie, Aberdeen and Hearts’ displays at Ibrox.

Many would argue a loss against Celtic does not change much, and we were never expected to challenge them. Sorry, but any Rangers fan who believes losing to Celtic in any context does not matter is no Rangers fan in my book. I do agree we were never expected to challenge them, but then with Warburton becoming the first Rangers manager in history to lose to a new Celtic manager three times in a row yet another dubious honour becomes bestowed on a manager in the wrong job at the wrong time.

He will produce fleeting matches where he will flatter to deceive us that he is the right man to take the club forward, and this site will probably be tricked by those moments temporarily, like enthusiastic fools aching for a Rangers to trust and be proud of. But the underbelly of truth is Rangers will never be the titans we expect them to be for as long as Warburton is boss.