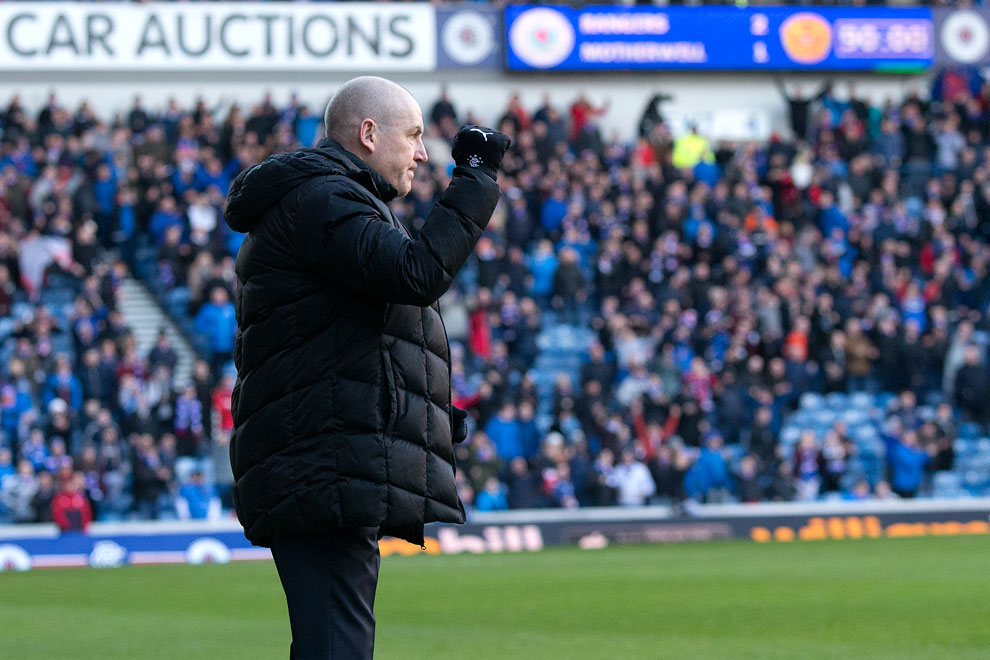 While on the face of it a win is usually a positive, on this occasion overcoming a stubborn and often superior Motherwell side at Ibrox reaped few compliments, with most fans and headlines focusing on the fact it took evergreen Kenny Miller to bail his team out once again. The 37-year old is one of the few who has held his own at this level, and time and time again the ex-Scottish international has stepped up where others could not.

But this cannot and should not conceal that for 76+ minutes of this match, the home side had not managed a single shot on target against visitors fourth bottom of the table. The Mark Warburton School of Football Philosophy simply does not work, and the longer this aimless tiki tika rubbish goes on, the more fans will have to endure scraped wins, draws and even losses.

Sure, Rangers had all the possession, indeed completely dominating their guests, but it was completely toothless, with Miller coming deep most of the match to help out a disfunctioning midfield. Competitive debutant Jon Toral once again started impressively, with some nice vision, touches, flicks and passes, but as he did in Germany, he faded dramatically on around 25 minutes and struggled thereafter to have any significant impact.

This lad either has concentration or fitness issues, or a combination of both, but amusingly Sky Sports’ commentator Ian Crocker alluded to his being educated at the schools of Arsenal and Barcelona proving he ‘must have something about him’. An alternative theory is that neither school was particularly impressed with him and that is why he ended up in Grenada.

Equally in the middle Jason Holt’s form continues to middle along – he really has not impacted on the SPL on any great level. Yours truly and many around me truly believed the ex-Hearts playmaker would coast the upgrade, but alas he has looked pretty mediocre, and that goes for the majority of his peers.

But ultimately it is Warbs’ philosophy that has not, does not, and never will work in this particular league – and the man is evidently too stubborn to try anything else. Even his assistant Davie Weir admitted they had secured their ‘top two targets’ in Hyndman and Toral this January. Two 6-month loans in an area not requiring new additions were top priority?

Rangers’ and Warburton’s problems were summed up by Motherwell’s goal – Cadden’s swinging cross from the right saw Robbie Kiernan haplessly exposed and a mile out of position, as Moult beat Hodson with bewildering ease to soar a superb header home. These are issues Rangers have been plagued with from day one under Warburton – a complete inability to defend. Issues he simply refuses to address.

That Miller’s (excellent) double from Waghorn and Hyndman’s assists got Rangers out of a hole is neither here nor there – there can be no satisfaction when a Rangers team cannot, till 15 minutes from the end, manage to hit a single decent shot at home.

Under Warburton Rangers continue to stumble drunkenly in the dark. Sure, the lights go on now and then so they can pass endlessly to each other, but the lights go off again and the aimlessness resumes.

Alas, Warburton’s team is made up of players other teams either did not want or youth loanees sent here to be ‘improved’. The only significant first team squad players Rangers signed who were important at their old clubs were St Johnstone’s O’Halloran, Preston’s Joe Garner and possibly Danny Wilson. The rest were deemed not good enough for their parent clubs or were free agents because no one else significant wanted them.

That is the patchwork mess Rangers essentially are now, with a tactical system which does not work at this level. Even Barcelona are struggling a little these days, with this approach no longer being as effective as it once was. The Atletico, Leicester, Portugal, Real approach of dynamic, hard-working impact football under a compressed unit with a manager players fight tooth and nail for means the ‘best’ teams no longer are the best or more successful teams by default.

Unfortunately Warburton’s Rangers are not the best in any sense.