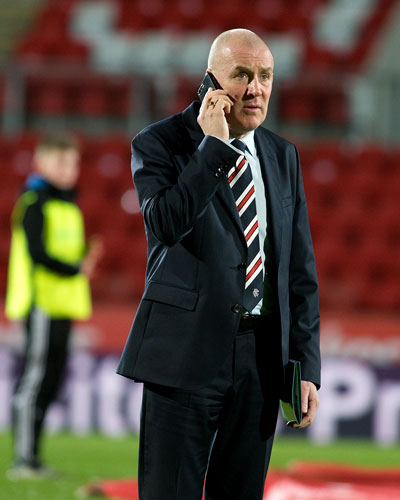 For 30 minutes of last night’s visit to McDiarmid Park Rangers looked like the side who had put away both Aberdeen and Hearts in quick succession, not to mention the one who took midtable Kilmarnock to pieces earlier this season.

The play was fluid, dominant, and there was no question Rangers were far and away the better team for that first half hour. It looked to all intents and purposes that the two-match form dip between Hamilton and Inverness was a thing of the past and Warburton had once again got his troops smoothly oiled.

And that was the way it remained – until everything changed when Rob Kiernan’s absolute howler gifted the hosts a goal and the home team changed their system. While Tommy Wright’s side had been outfoxed for the majority of the first half, their wily coach saw a weakness down Rangers’ left with only Barrie McKay and Danny Wilson as defensive cover, both being ill-suited to the task. He switched to a back three after Saints’ equaliser by sacrificing Alston for Scobbie, giving himself an extra body in midfield and thereafter Rangers were reduced to a toothless nothing, producing next to no incisive play.

In short, once again Tommy Wright had Mark Warburton’s number, and quite frankly the visiting manager had no response despite vastly superior resources. Wright remains the unbeaten coach in their head to head, with a win and two draws against Warburton, and for love nor money Warbs’ appears unable to deploy his vastly richer reserves in a way that can deal with Wright’s smart approach.

Sure, until the equaliser, Rangers were definitely the better side, but that counts for absolutely nothing. Many fans are slaughtering Rob Kiernan, and rightly so; the giant stopper had a largely dreadful night, undoing so much of his good form recently, but the truth is it is Rangers’ system seriously under scrutiny; starting out as a back three, before sort of changing to a back four kind of…

When you look at Warburton’s tactical approach, it is hard, very hard, to identify what it actually is. Sometimes it looks like a 3-5-2, sometimes a 4-3-3, others a 4-1-4-1 – it is not so much Warbs has changed the system, it is more than it is becoming harder to identify what it truly is now. With McKay deployed as a left wing back, the tactic made no sense and that lack of sense and apparent organisation seems to be a real issue. If fans watching cannot make head or tail of what the formation and system is with a superior viewing vantage point, how can the players figure out what their setup is?

With all-conquering Celtic coming up in a few days’ time, Rangers have now had three unconvincing matches in a row – this site gets accused of negativity, personally I would rather call it realism. If you want rainbows and buttercups no matter what is happening on the pitch, please use another site more suited to your needs. The harsh truth is for every step forward Mark Warburton seems to take, he takes another two backwards.

Every time we get a chance to give him real praise, he then makes a hash of it all over again in a new and fascinating way.

Last night he had no answer for modest St Johnstone. Once again Wright outfoxed him over the 90 minutes. Outwith his injury concerns, there appears little hope he will overcome Brendan Rodgers’ Celtic.