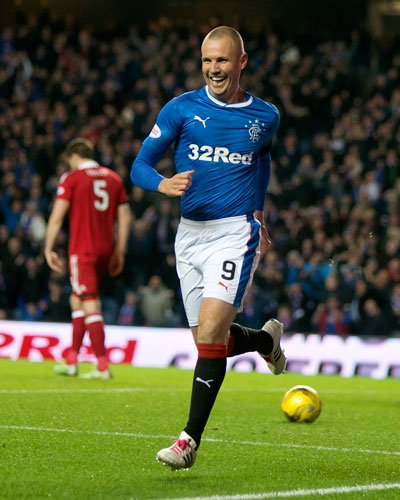 I love these articles. The ones frequent last season but few and far between this time around. Positive and happy articles reflecting performances where few have a bad word to say about how Rangers played. This is the kind of feeling Rangers fans like myself and I am sure every one of you wants to have more often than not.

We know Rangers cannot play this well every single match but if the level can aspire to this height maybe seven of every 10 matches we will know our Rangers are delivering what our Rangers should.

Following the absolute atrocity in Gorgie where everyone including yours truly had Warburton’s head on a silver platter and the players making their way out of Govan, mood and sentiment regarding this present regime had rarely been lower.

It had truly been one of the worst displays in a long time by a Rangers team, with even the ever-optimistic Andy Halliday confirming he considered it the absolute pits by a distance. Following Wednesday, belief in Warburton’s system was on the floor, compounded by a total lack of quality displays since the tail end of last season. His tactics were not working, his players were not playing for him, and something had to change.

Well, today’s monumental tussle with traditional ewe-bound foe Aberdeen proved one thing for certain; this Rangers squad, low standard though it evidently is, is still capable of playing for the shirt like a true Rangers team should. It can fight, harry, poke, press, and even play good football, and it can make every Bear proud to be a supporter, pride which has been slightly dented in the pit of recent Rangers’ despair.

Do not get me wrong; after the Killie match we also thought a corner had been turned, then Ross County showed up and square one was ground zero all over again. So while today’s display carried all the hallmarks of a team starting to believe in itself, nothing is being taken for granted unless that level holds over the next few matches and beyond.

Barry Ferguson, when things were bad under Paul Le Guen, once said he would not believe a corner had been turned until Rangers went 10 games unbeaten. Well, these new circumstances make such a demand a little too high – and as such, that kind of expectation may just be a little too lofty. However, readjusted for these unique times, I would argue perhaps a period of no more than two defeats in 10 with maybe 6 wins minimum and two draws might show real progress. Crude, but probably realistic.

However, all too often Rangers fans feel the zenith of a great result, and want to believe everything is on the right path. I want to believe that. We all do. Then it all falls apart the following match. Which is why I will still reserve judgement while allowing myself to savour a truly wonderful afternoon at Ibrox with one of the best matches the Premiership has witnessed between two of its best sides in some considerable time.

Indeed, the early signs of this match showed promise – while Rangers did not come out the blocks quite as fast as they did v Killie, they nevertheless showed guts, heart, ferocity and bite once they got going around 10 minutes in. Aberdeen had shown real danger, and in reality could have made it 0-2 before 20 minutes; but a bit of earned luck, good defending and fine saves prevented that and the game became a true blood and thunder encounter with both teams throwing themselves into tackles and sparing no quarter at all.

This was a real match of football, and Rangers were up for the fight.

And a word has to go to the manager. God we have been critical of Warburton recently. This site, the media, the fanbase; and it has been fair. But today he sprung two massive surprises – Kenny Miller in midfield, something which had most fans scratching their heads, and a well-earned start in James Tavernier’s place for Lee Hodson, an international who really has been wasted in his time at Ibrox.

Guess what – these changes, coupled with a complete overhaul of the front three, worked perfectly – particular Miller, whose presence deeper made that midfield work harder than it has this entire calendar year (Killie and Celtic wins aside). His battling leadership qualities alongside Jason Holt and Andy Halliday pushed both to a level we have not seen from them in far too long, and the three of them played with gusto, quality and tempo, not to mention grit. Not quite Busquets, Xavi and Iniesta, you understand, but it was what Rangers needed. It was a masterstroke from Warburton, who, while he did not change the system (explained here), nevertheless showed the ability to really try something new.

Hodson also had a fine match down the right, and while one early booking could easily be attributed to ring rust, the Norn Iron international was polished and solid otherwise and his goal a truly fine strike.

O’Halloran’s pace was a real problem for Aberdeen’s rearguard too – resorting to just taking him out when they could. While the ex-St Johnstone winger maybe did not produce too much in the way of delivery, his presence was a handful and caused McInnes’ men no end of grief.

McKay played a similar role on the left – not a lot of end product, true, but fine use of pace to imbalance the backline, and it was a tactic Rangers used over and over to vicious effect.

Meanwhile Clint Hill and Rob Kiernan’s burgeoning partnership, while not quite Gough and Butcher, is nevertheless actually starting to look convincing at times. It is not perfect, the lack of pace can be an issue and both can get caught for position too often, but Hill is starting to lead well, and it seems Kiernan is learning from him. We are even seeing Rob heading convincing clearances from his own box, something he was afraid to do on Wednesday alongside Wilson. If Rangers do have a best partnership, it definitely is not Wilson and Kiernan.

Fundamentally though, getting back to the bigger picture, this was a glimpse, a glimpse of how Rangers, focused properly, set out correctly, and showing grit and determination, can live with the best teams in the SPL. They matched and beat the very, very tough Aberdeen, and proved when it clicks, Warburton can get it right and the team can play like lions.

There is a long way to go, and I am mindful of the high likelihood Rangers will lose all the impetus with a predictably feeble display against Hearts next weekend, but if they can stride onto the pitch like they did today, believing in each other, the system, and will play for themselves, each other, their manager and most of all us fans, victory is quite possible and maybe this season is not a bust after all.

Keep this up lads, please, keep it up.