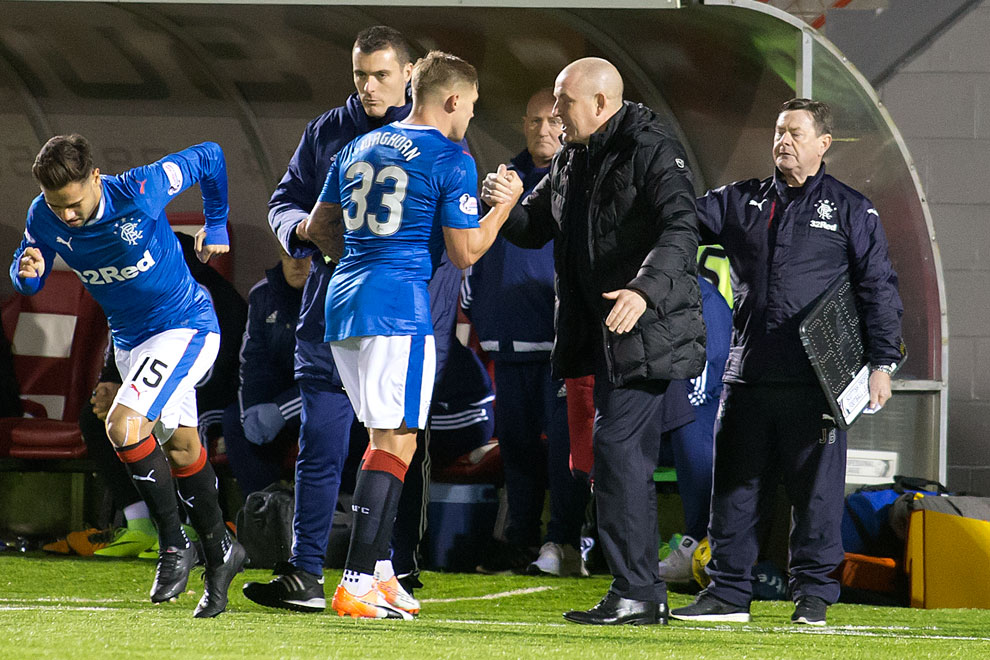 Friday 11th March. Seems a long time ago, and the truth is that it is. For deep in Spring on that date was the last time Rangers managed three consecutive league wins in a row. Back then the illustrious opposition was Morton, Raith and St Mirren; it was here Rangers’ imperious form of last season just began to stutter, and it has taken nearly 10 months for Warburton to manage three league wins in a row again.

Only the difference is the calibre of opponent this time was far greater; Aberdeen, Hearts and Hamilton.

Last night’s victory in the newly-name SuperSeal Stadium (New Douglas Park to you and I) really did send out the biggest message Warbs’ regime has in a long time; while the play was not pretty for all 90 minutes of events at Martin Cannings’ patch, if ever all dimensions of competence were on display, last night would be it.

We had ugly attritional play against a robust and well organised home side who successfully strangled their ineffective guests for the best part of 45 minutes, but in conjunction with defending which did suggest the Wilson and Kiernan partnership, after 18 long months, is finally starting to click.

Then when Martyn Waghorn’s stunning header clipped the underside of the bar from the edge of the area and bounced over the line, followed by his even better second, a neatly-controlled volley following another wonderful McKay assist, Rangers’ play plain soared and we saw more than a glimpse of the beautiful flowing football which punctuated the early part of Warburton’s time at Ibrox.

It was not until Andy Halliday’s carelessness on the ball and a Hamilton mini-fightback began that the Famous looked a little rattled, and while Crawford and co did manage a few decent attempts, despite how ugly the visitors’ play quickly became, the ‘dig in’ grit of their ability to fight for the shirt won the day and held out. Quite comfortably really, it has to be said.

All facets of a complete win were on show last night, and this really was the test the last entry alluded to. If Rangers could not go to Hamilton and win, could not ‘do it against the diddies’ then the progress seen against the division’s better sides in Aberdeen and Hearts would all be for nought.

But they did, and it was not. Indeed, few sites have been more critical of the team and especially Mark Warburton in recent months, but his change in system in recent matches really has started to work, as has his new penchant for springing personnel changes. Along with the new tactical approach.

Looking at all of these, while some commentators claim Rangers are still 4:3:3, it is evident that if it is that formation, it is a thoroughly fluid one which evolves into 4:1:4:1 as and when needed. Lee Wallace is effectively a midfielder/winger/striker half the time, and Joe Garner is operating as a target man, with a versatile four man support of Tavernier, Holt, McKay and Waghorn who all interchange – Tavernier can often be seen on the left, in the middle or mostly his more favoured right, while Holt is starting to truly motor now mostly in the middle, providing the link play and support which propelled him to such importance last season. Meanwhile McKay flitted between both wings and central, and Waghorn was a constant menace from deep.

In other words, at any given time, the four midfield slots are varying (sometimes becoming the more familiar 4:3:3) and that interchanging is a handful. It is a completely new approach and system, and you would have to concede it is working a charm.

Secondly the personnel surprises; every new pre-match now sees gasps as another ‘bizarre’ selection appears in the XI. Against Hearts it was Miller in midfield. Against Aberdeen it was him being joined there by Tavernier. Last night it was Miller ditched entirely and Waghorn starting. These planned changes are clearly being worked on in training, with new approaches being utilised against each opponent and it is reaping rewards. This unpredictability throws a spanner in opponents’ works and it is hard to deal with a different plan each match.

Last but not least is the presence of Garner to give Rangers that dreadfully-needed plan B. Rather than the boring, ineffective and predictable tiki tika that Warbs’ appeared infatuated with, we are seeing far more aerial threat. While a few of his attempts went astray last night, Danny Wilson’s left peg is becoming a valuable tool to feed the wings from deep, and particularly to find the bulldog Garner up top. Admittedly I am still not a huge fan of the ex-Preston striker, but his contribution is evidently vital now to how Warburton’s new system is working – he is a huge outlet to take pressure off midfield, and to take away the need for constant passing which goes nowhere – instead we are seeing longer play, more dynamic play, and last night was the best example of both flanks absolutely destroying their opponent. We saw McKay and Wallace running riot on the left and Tavernier and Waghorn doing likewise on the right – in most cases fed by cleverly-weighted lobs from deep.

There was such an absence of this till recently, and watching Rangers adapt has become a pleasure.

No one was more critical of Warburton’s inability to change than I, and it is nice to see him show he can, because we are all seeing the benefits now of alterations. Yes, before the first goal and after Hamilton’s equaliser Rangers were far from at their best, but that is the point – being able to win against stuffy opponents while playing a bit in there too is a sign Rangers are going, at long, long long last, in the right direction.

There is an equally long, long long way to go but as of right now, Rangers are becoming comfortably the second best team in the SPL, which is itself way beyond what some feared. The journey to restore parity in the SPL and challenge for the title is a long one that the club and fans remain on, but there is enough evidence now to suggest Warburton could have finally found the formula.

Just keep it going lads, keep it up.