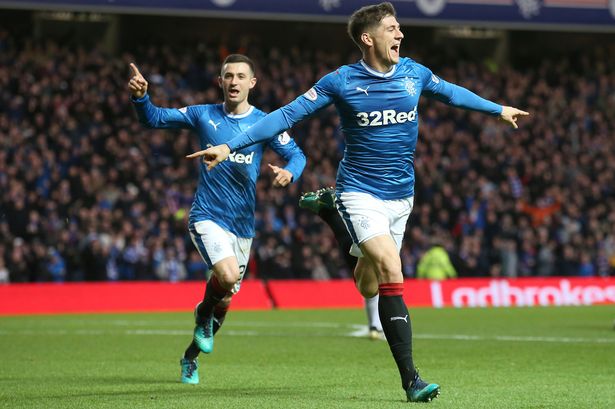 If one player has divided Rangers fans significantly over the past 18 months of Mark Warburton’s reign, it has definitely been Rob Kiernan. Initially rated by many, to the extent of most defensive criticism being aimed at his partner Danny Wilson, Kiernan was cut a fair bit of slack last season for his defensive weaknesses by fans, and while he started this season unimpressively to say the least, his recent displays over the past six weeks have shown a significant modicum of improvement.

While still no Richard Gough, Kiernan has shown more bravery in the tackle, a higher willing to get stuck in with some vital last-ditch blocks, and an increased tendency to use his head, both metaphorically and literally.

While miles off the level required by a traditional title-chasing Rangers team, Kiernan nevertheless has shown a better level in recent times, and without doubt these displays have not gone unnoticed with the news English Championship giants Fulham are interested in the former Wigan defender.

A national publication has run with the story that the nomadic stopper is interesting the Craven Cottage outfit, with manager Slaviša Jokanović said to be preparing a £2M bid for a player Rangers picked up for peanuts last summer year.

The question is should Rangers sell if a Fulham (or anyone else) bid arrives? There are two schools of thought to this debate; one, where his unimpressive displays of last season and the majority of this should remain primed in the memory, and the idea of making circa £1.8M profit on him is too good to resist. Furthermore, Rangers have a theoretically ready-made replacement in Swiss stopper Philippe Senderos just sitting there awaiting his turn, so signing a replacement might not even be that critical.

The second aspect of the argument though is that Kiernan may finally be finding his career feet at Ibrox, at this level, with his well-travelled career stopping him ever settle at a single club. Suddenly over the past few matches the giant centre half has looked much more the part, and is there any point selling him. Moreover, he is a well-known Warburton favourite, so would the Hat even want to part with him? However, the contrary case to this is that Robbie has shown brief form at Ibrox before, form which did not last. Is it then worth cashing in while his stock is high?

It is a tricky one, but until Rangers are on the same footing as Celtic, we have to consider ourselves a selling club. In all fairness, even our manager has said it:

“Please don’t report this the wrong way, but for every player in our squad, if the right price comes in, they’ll go, every player. We’re not in a position to turn down bids that are deemed to be good value. I don’t want to lose anyone, but if the chairman and the board decide that it’s good value for Rangers, that’s the nature of the game we work in.”

So if the powers that be dictate that a £2M bid from Craven Cottage for Kiernan is good value, the chances are they will sell.

The trick is for Rangers to accrue worthy replacements, be it with big money or those ‘hidden gems’ Warburton loves so much.

However, I will turn this one over to the readers; would you sell Rob Kiernan for £2M to Slaviša Jokanović’s Fulham?