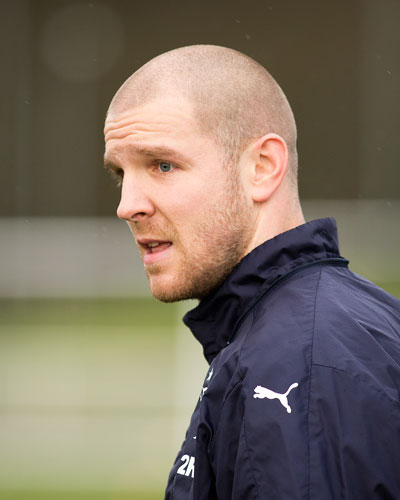 When Rangers were first linked with Philippe Senderos, it looked finally like Mark Warburton was taking Rangers’ defensive woes seriously. A long-standing complaint from most fans was the fragility at the back, and the unreliability of the Wilson Kiernan partnership, a duo which was just about sufficient for the Championship but would surely never cope with the country’s top tier.

Hence when Rangers not only got linked to ex-Milan, Arsenal and Valencia centre-half Senderos but actually had the 50+ Swiss cap train at the club’s Auchenhowie facility, it looked a surefire solution to Warbs’ defensive headache.

Here was a top-class defender with Uefa Cup, Champions League, European Championships and World Cup experience and he was earning a deal at Ibrox?

Unfortunately, something odd happened – instead of the former Grasshoppers star swiftly gaining a contract, Rangers instead went in pursuit of the thoroughly disliked Joleon Lescott, a defender who once had the world at his feet but now was part of a disoriented Villa side that got relegated. We all know the soap opera that occurred around this so I will not revisit it.

It did not happen, and Senderos many days later belatedly got his deal.

And, a couple of starts aside since, has not featured for his new employers beyond taking up space on the bench. When Clint Hill found himself suspended for the visit of Hearts, it was not his ‘marquee’ centre back Warburton turned to, but Danny Wilson instead. Wilson, who is gradually gaining long-overdue popularity with swathes of Rangers’ support, has never been universally appreciated, but while his form is currently rather impressive, if Senderos could not get a call when Clint Hill was unavailable, it suggests two things:

1: The giant stopper will be gone next month.

2: He was never wanted in the first place, and was a last resort after alternative deals fell through.

For whatever reason, possibly not impressing in training, Senderos just is not rated by Warburton. His display at Parkhead was not even that bad, but two mistakes seem to have defined him and somehow he just never regained any favour at all. If he ever had any to begin with.

It would be a surprise to see him remain at Ibrox beyond January, albeit the manager always professed he needed four defenders for the SPL, and right now that is the number Rangers have. But only three of them ever get selected – defence circles between Hill, Kiernan and Wilson; with Senderos permanently on the outside.

It is an odd one, but results have improved, and Rangers have conceded so few goals (just two in three matches, both being as the result of midfield errors) recently you would have to concede defence is working right now too, justifying the situation.