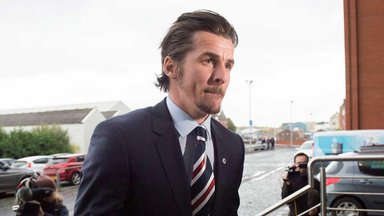 It is not often a signing is made which goes against nigh-on everything Rangers stand for, and which appears to violate all aspects of common sense from all sections of management, but with the signature of now officially departed Joey Barton, we got exactly that.

The most controversial player in the modern game must go down as the most ill-judged, ill-advised, and downright farcical signing Rangers have made in decades.

In fact, off the top of my head, I simply cannot think of a more ludicrous signing in over 140 years of this proud Club’s existence.

Nothing about securing Joey Barton made an iota of sense, and with the termination of his deal by mutual consent, the embarrassment factor has hiked beyond repair.

Yes, ‘beyond’. This is something Rangers cannot recover from; by this I mean Mark Warburton will be forever remembered not for getting Rangers promoted, not for being a ‘Magic Hat’ but for being the manager who made the stupidest and worst signing.

Even Flo was a success by comparison – only the transfer fee counted horribly against him; but Barton was just an absolute disaster on every single level and such a dreadful loss of judgement from whoever was ultimately responsible for dredging him up to Glasgow.

Worryingly, it cannot just be cited as a one off – Warburton’s era has been littered with truly embarrassing trials, decisions, signings, and mistakes which absolutely should not have been made.

John Eustace being given five months to prove himself. That affair went beyond farce.

Targetting Joleon Lescott; this confirmed Warburton’s bizarre choices of player in signing Barton was not isolated.

Oguchi Onyewu; American international who did absolutely nothing wrong in trials or in his friendly appearance at Battery, but was rejected without any reason attached.

And frankly, in yours truly’s eyes, the Rangers fans deserve an apology, an official statement acknowledging Joey Barton was a mistake and showing contrition for it. Naturally it will not happen – a contractual gagging order goes hand in hand with mutual consent and the current official statement is that no further comment will be made.

Dave King will be quietly seething that his management team have sullied Rangers’ reputation with this nonsense; and Rangers fans have frankly been poorly treated by the debacle that was the handling of it.

It is why a small apology really should be forthcoming – Rangers fans spend our hard-earned money watching the team, buying the merchandise, and while we do not spend cash to expect a win every match, we expect respect.

The way this farce has been dealt with shows no respect to the supporters, and either Warburton, Weir or McFarland has made a giant mess of it.

I hate this entry. I hate being so critical and even looking it over it sounds like something an East End blogger would probably write about us (not that I would know, I have never read a single piece of trash any of them have ever vomited out), but it is also utterly true.

Joey Barton is gone, and should never have come in the first place.