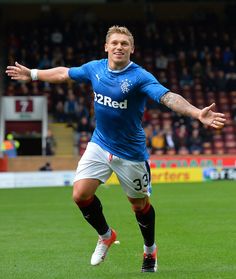 More rumours of discontent from the Rangers camp have surfaced this morning with claims manager Mark Warburton and star striker Martyn Waghorn have had a falling out leading to heightened speculation of the former Leicester striker’s departure, with Bristol City continuing to be linked.

Warburton and Rangers do not have their problems to seek, with dreadful form on the pitch, the Joey Barton debacle off it and now these claims that the powerhouse forward and Rangers’ boss have had a spat; Waghorn has lost his place in the side recently, and that will not have aided relations with his manager.

It is another in an increasingly long list of problems surfacing regarding this troubled regime, one which promised so much once promotion was secured last season but now is threatening to unravel horribly.

Claims Warburton has lost the dressing room are also appearing, with speculation that the squad is no longer playing for him; claims backed up by the Barton shambles and this news (if true) about Waggy.

Naturally the Waghorn story is as yet unconfirmed but then the Barton one never was either and he is imminently to depart with coffee machine in hand.

Rangers are in a real pickle right now, and January promises to be a very interesting window with potentially a great number of departures. The question is will the incoming be good enough to replace them?