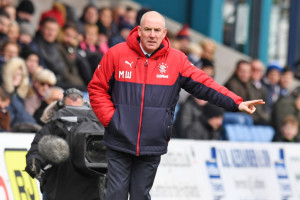 One of the most common complaints Rangers fans have made in the recent past has been the ineffectiveness of the 4:3:3 formation manager Mark Warburton has religiously stuck to.

Yes, there have been some occasions now and then where he reverted to three at the back (the first loss at Easter Road last season saw Ball between Kiernan and Wilson as Wallace and Tavernier went fullback) but by and large Rangers’ manager has been stubborn with his refusal to switch.

And while many fans advocate an alteration to a more traditional 4:4:2, the full truth is that is not strictly the solution.

What we need is variety!

The original quote which Warburton remains haunted by to this day was the classic:

“The best plan B is to do plan A better”

Absolute nonsense, and everyone knows it. What we need is versatility – the ability to switch between different formations for different scenarios. It is not like Rangers lack the player base for a 3-5-2 or a 4-2-3-1 or various other options, and that is what would work best.

In short, it is not any one formation that Warbs needs to change to – it is the mentality of never shifting from his favourite he needs to modify. Instead, Rangers need a plan B, C, D and E if not more, and the innate ability to handle various different teams by playing different ways if needed.

Teams do have a primary shape, true – Barca have not altered from the 4:3:3 since Rijkaard and Ronaldinho essentially perfected it in the mid-noughties, but then that is the difference – they have/had Ronaldinho, Guily, Henry, Messi, Suarez, Neymar – the players good enough to make the difference. Rangers have Martyn Waghorn, bless him.

And Rangers in the 90s mainly went with 4:4:2, but the critical difference was the willing to alter it when things did not work so well – to adapt within a game. And with Uncle Walter’s second spell he was more than happy to use one up front for tougher matches and go five even six at the back.

Warburton has simply refused to do this. Even at Hampden it was still (a messy) 4:3:3 with Hodson and Tavernier doubling up on the right while McKay and Wallace did likewise on the left, as Holt and Halliday did their usual in the middle and Miller and Garner made up the rest of the attack.

All Mark Warburton has to do is show a willing to change shape per match – he looked like he had actually learned it versus Killie when defensive duty saw two banks of four more than once throughout the match – no surprise it was the best Rangers have played this calendar year.

But then v County it reverted straight back to 4:3:3, and lost all ounce of impetus.

It does not have to be the end of that formation, but it has to be the start of versatility – manage per game, Mr Warburton, not just for the season.