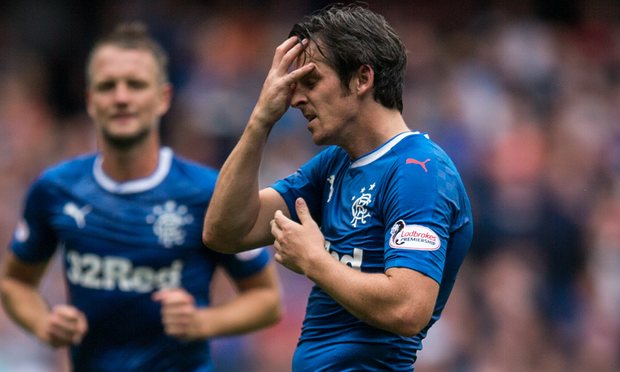 With yesterday’s confirmation from every major news outlet in the UK that the Joey Barton nightmare is finally over, only official verification from Rangers awaits.

The fiasco has been one of the most embarrassing episodes in Rangers’ history, handled appallingly by the Club on every level and left simmering to boil with such weak action taken over the actions he allegedly carried out at Auchenhowie in September.

That Rangers were in for the player was treated as a joke by this site earlier in the summer; we dismissed it out of hand arrogantly, but with good reason; why on earth would a Club like Rangers known for its dignity and with a manager well-renowned  for pure class take serious interest in a controversial time bomb like Joey Barton?

Barton has probably the worst reputation in modern football; while he had a good season with Burnley last campaign, nevertheless no one will remember him as a Marseille, Man City or Newcastle star – he will be remembered for his jail term, for his mocked Marseille press conference, and his utterly bizarre appearance on both Question Time and Newsnight.

This is a man with a bigger rap sheet than Eminem, and while he had undeniably matured, and Rangers fans, this site included, allowed ourselves to cut him slack and support him, it became abundantly clear after four performances that Rangers had signed a dud.

It was left to the Old Firm match at Parkhead where fans demanded he finally stand up and be counted; in the end he was nothing. All that social media nonsense with Scott Brown and Rangers’ marquee summer signing was left looking like a fool after failing to dent the match and being totally overrun by Brown.

Following that, the Auchenhowie fiasco. So it might have been some home truths he yelled at Halliday and Warburton, and he might have made some salient points, but the way the Club handled it was hopeless, and while this article may sound castigating of Barton (and it is) it was Rangers who chose to acquire the biggest powderkeg in the modern game and bring him to the most claustrophobic football city on planet earth.

After yesterday’s initial news he was off sick with stress from Rangers, it was later revealed his contract will be terminated with a fairly modest £250k payoff.

In a sense, I have to give the man some credit. If that figure is accurate, and there is no evidence yet that it is, then he has willingly written off well over £1M of the remainder of his deal. I have to applaud that, and it does the Club a favour.

Of course it might be self serving, that he was just so desperate to get out he was willing to take anything simply to be free.

Either way, whether it is the board, Frank McParland or Mark Warburton ultimately to blame for this signing, it truly goes down as one of the most abominable in Rangers’ history. Maybe the absolute worst.

A bad signing, with ‘disaster’ written all over it, with nonsense and a circus before it then completely exploded and made the Club look incredibly foolish.

It was atrociously handled, and few supporters can reasonably argue otherwise.

Let us hope nothing even close to this ever happens to Rangers again.