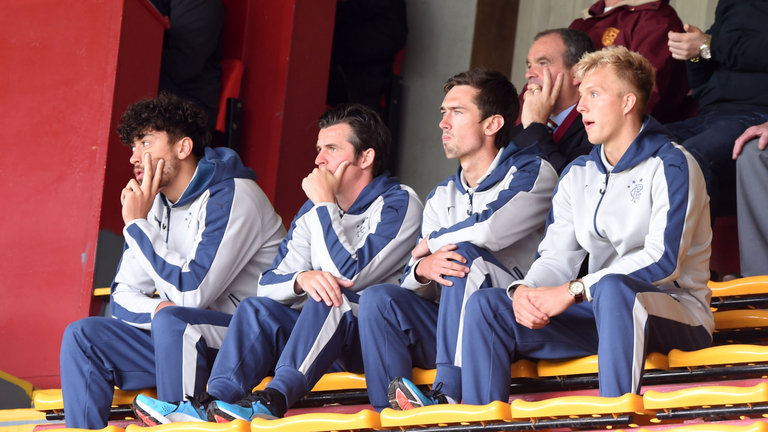 On Sunday Rangers elected to start only four of the summer recruits, a number itself second only to the corresponding league fixture’s record which preceded it, when five of the new recruits took to the field that day in Glasgow’s East End.

At Hampden Rangers overlooked eight of the chosen signings acquired during the summer influx for various reasons such as injury, banning, or out of favour.

12 signings came in during this period, including the dream midfield Rangers fans were genuinely excited about in Joey Barton, Jordan Rossiter and Niko Kranjcar, with Accrington’s Matt Crooks also arriving at the Marble Staircase. Once again, for whatever reason, these players were absent or benched for Sunday’s clash.

Completely missing from the match day squad, Harry Forrester posted a cryptic snap to Instagram highlighting a train trip – was the creative midfielder (secured in January) trying to say something?

Just why is Mark Warburton sticking primarily with the players he already had from last season and using the new signings so sparingly?

One has to spare a huge thought for Joe Dodoo, Michael O’Halloran, Philippe Senderos, Matt Crooks, Lee Hodson and Forrester to name but six who just do not seem to appeal to Rangers’ manager enough to start them regularly.

Let us start with O’Halloran. Few would deny he did not have a great first season at Ibrox – arriving in January, he lacked a pre-season, and this was given as a great excuse as to why he was not being given a run. Many fans assured the rest of us his time would come and he would be a big player for Rangers this season. Alas, despite his impressive cameos (he is no Messi, of course, but he has been useful and managed to force two different defences into own goals) he cannot get a game. He arrived this year after months of hype, months of fanfare and a big transfer fee, but simply does not seem to be able to break through into this team regardless of his contribution.

Next there is Joe Dodoo. The lad has a great deal of potential, with surprisingly good movement and positional sense for such a young man, and has decent pace and undeniable strength. Sure, he is not Luis Suarez, but he equally finds himself on the bench every match.

Then we have Matt Crooks. Rangers are crying out for a big strong defensive midfielder with Rossiter perennially injured and Barton perennially Barton, and here is a giant, tough, aerially dominant ‘unit’ wasting away on the bench having been match fit for around two months. Warburton elects to stick with out of position Andy Halliday there instead.

Next up Lee Hodson. Quite simply the Northern Ireland international has been excellent in his few appearances. He is as good on the left as he is on the right, and was one of Rangers’ performers in Mount Florida. Yet despite his quality Warburton is not interested in using him frequently – instead sticking with the sadly out of form Wallace who increasingly becomes a liability with every passing match. And I love Lee Wallace, admire him greatly, and have nothing but praise for what he has given to this club – but starting him over Hodson is now a sentimental decision and not a football one.

Last but not least Philippe Senderos. Yes, he had two idiotic moments at Parkhead, but this is a 50+ Swiss cap with experience of Europe’s best leagues, not to mention its best competitions and that of his country, yet he barely features other than on the bench. Rangers fans cannot truly judge him as he has not yet started two in a row (unless one counts Linfield then Celtic). He must be wondering why he fought so hard to win a deal.

This is the squad Mark Warburton has built, and it is dysfunctional. He is not interested in half of the players he signed, and his judgement is questionable having brought in three injury-blighted players (Rossiter, Kranjcar and Windass) not to mention Barmy Barton and his ill-conceived pursuit of then-Villan Joleon Lescott.

This site has had a lot of stick for ‘negativity’ and being ‘run by Mutton’ – last season it got attacked for being so positive. See the pattern? Last season was mostly great, and there was much to work with. Things were going in the right direction. This season there is no sign of that, and we are calling it the way we see it.

Many ask what we expected. That Rangers could not have gone for the title, and even a top three slot would have been a challenge. Well, the mistake was then splashing the cash on players who Warburton clearly believed would propel Rangers to those heights. Are fellow fans really telling me we signed Swiss international Philippe Senderos, former England international Joey Barton, former Croatian international Niko Kranjcar, Norn Ireland international Lee Hodson and England U20 captain Jordan Rossiter to finish fourth?

To all those who try to reduce expectations; I partially agree, I did not previously see Rangers beyond around midtable this season – the problem is putting out big wages on big players who artificially inflated those expectations and made us all believe we might actually be top two. As many have said, the second biggest wage bill in Scotland really should be reflected in performances and the league position.

But it is not. We are seeing bad calls on signings, players not being used, players injured, out of form players continually starting, and essentially using last season’s team all over again.

It all feels very directionless.