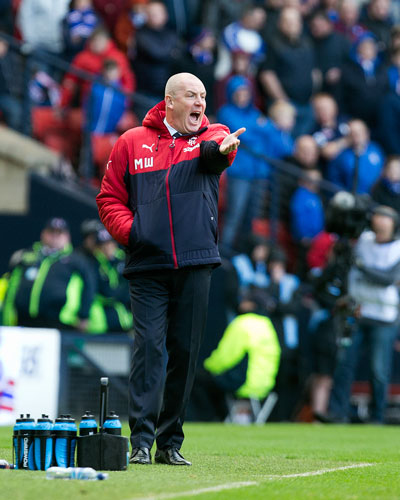 25th July 2015 and Rangers took to the field at Easter Road with their newly assembled team compiled by highly-coveted manager Mark Warburton and after a patchy first 40 minutes including being a goal down, James Tavernier’s stunning free kick equaliser ensured the travelling side never looked back and found the net another five times.

The performance destroyed the home side, following a season where then-manager Alan Stubbs’ men had the measure of Ally McCoist, Kenny McDowall then nearly Stuart McCall’s side too.

Things looked bright, very bright, and over the course of the season, despite the odd inevitable blip here and there, Rangers fair coasted their way to the title with room to spare.

Mark Warburton looked to be the answer Rangers fans had sought for so long, and following that Old Firm semi victory, the path forward seemed more sure-footed now than it ever had.

While there were a few questions about the defence and lack of plan B, and a valid observation that Rangers’ form had painfully dipped since aforementioned victory v Celtic, the summer window was upon us and Warbs would dip into the market and build a team ready to compete in the SPL.

Only…it simply has not worked out that way.

Yes, Rangers have not absolutely disgraced themselves in Scotland’s top flight, but the harsh truth is yesterday’s Old Firm semifinal showed just how far behind Celtic Rangers truly are, as if the league pummelling which preceded it had not already.

And it is not helped by a manager who appears totally out of his depth and incapable of managing Rangers the way they need to be managed.

Rangers, in blunt harsh truth, have not progressed since Warburton’s debut in Edinburgh. There has been absolutely no development in any area, no improvement in any sense, and only those who swear by this regime would say different.

Rangers started yesterday’s Old Firm semi with, effectively, last season’s team. Only Gilks, Hill, Hodson and Windass stopped it being the usual selection, and it is anyone’s guess what formation Warburton was actually trying – credit to him for throwing in Hodson as well as Tavernier, for trying something slightly different, but this looked like a patchwork solution which had not been tested – and Celtic was a heck of a testbed.

By 88 minutes, only astonishing goalkeeping from the outstanding Gilks plus some crucial interventions by the surprisingly impressive Rob Kiernan stopped this from being the most embarrassing result in the history of the Old Firm. The attempts on goal were like target practice, and it was a near miracle the scoreline did not go into double digits.

In the end, Dembele’s goal was of the quality it took to beat Gilks on a day he seemed impassable, and the score is one which scarcely told the story of a one-sided match.

Some more harsh truths, folks. That is now five Old Firm whitewashes in a row Rangers have suffered – the loss in 2012 at Parkhead, the loss at Hampden in 2015, the semifinal in April, the Parkhead debacle which followed it and now this.

As a fellow fan said to me yesterday, the win (not against the run of play but certainly against the run of who created more – Celtic had 33 shots to Rangers’ 9) in April was the worst thing that could happen to Rangers – the kick up the backside for Celtic made them realise what they needed to do, and they went out and did it. They got in a great manager, and spent solid money bolstering the squad.

Meanwhile Rangers’ summer ‘rebuild’ signed the ‘dream midfield’ of perennially-injured Jordan Rossiter and Niko Kranjcar, plus the powderkeg personality that is Joey Barton. And started yesterday’s clash with none of them.

Yet more of Warburton’s signings were either benched or missing – Crooks, Dodoo, O’Halloran, Garner and Senderos – and there is a serious case that January could see something of an exodus given these guys just cannot get a game.

In summer of last year, chairman Dave King demanded a team that could not only win the Championship, but make the step up to the SPL – in other words, a team that would get Rangers promoted as well as be ready-made to deal with the SPL and compete credibly. Whether it is the quality of signing or quality of Warburton’s management, that vision simply has not materialised. And only one man can be held accountable to both the standard of recruits acquired and the way they are being handled.

This all sounds like something of an angry rant, and in many ways it is – but how much of it is wrong?

Is Mark Warburton really doing a good job? Rangers have barely performed since April – six (nearly seven) months of patchy at best displays punctuates where the team is right now, and there seems no obvious way forward.

No one expected Rangers to truly challenge for the title, but it is absolutely depressing to see just how far behind their city rivals Rangers are.

The worrying thing is just how many fans cut Warburton slack for anything he ever does wrong, which is a heck of a lot these days. The same fans who would have slammed Uncle Walter, or Advocaat – somehow Warbs has achieved Messianic status and shall not be criticised. “In Warbs We Trust” has become the mantra for so many, no matter what happens, and such blind faith is dangerous.

“Mark Warburton has forgotten more about football than you know” – has he, has he really? The man was a city trader till the millennium then, in conjunction with some part time coaching became a staff member at Watford in the mid noughties. He only became a manager full time in late 2013. Does he really know what it takes to manage top flight football in the SPL for a club the stature of Rangers?

The question is what makes Mark Warburton so special to a section of Rangers fans that he is above criticism to them?

And why is it always the players’ fault? The simple fact is most of them are miles off being good enough (that is a rant in itself), but is it their fault their ability is not sufficient for Rangers’ needs?

Whatever the answers to these and other questions, Rangers fans should be asking them of themselves – looking deep in the eye of the abyss and trying to fathom what exactly is wrong rather than just ‘giving it time’.

The club has a long, long, LONG way to go before achieving anything like Rangers Standard.