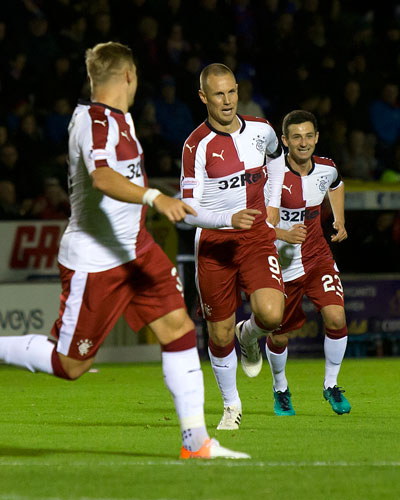 When Rangers’ XI was announced an hour prior (as always) to last night’s kick off, there was barely a single Rangers fan in favour of the selection.

All the red herrings about Joe Garner starting had been just that, and defence saw an injured Danny Wilson miss out entirely and his partner Philippe Senderos dropped to the bench for Rob Kiernan and Clint Hill to unexpectedly be restored to first team action.

This site was hopeful/convinced we had seen the last of Kiernan and his name on the team sheet drew a collective groan from the faithful, with his selection and that of the team ridiculed by all and sundry.

Yours truly certainly was not exactly thrilled with it, with a continued lack of trust being placed in the new signings beyond Hill and Kranjcar, and a reliance on the personnel that got this side promoted in the first place.

And while the first 10 minutes loosely justified that concern and the hosts should have made Rangers suffer for their unimpressive opening when Doumbouya found himself with a free header inside the five yard box only to blaze over before four minutes, nevertheless when in-form Kenny Miller rocketed home a stunning 20-yard volley from Lee Wallace’s gloriously swerving cross 15 minutes later, it was really only the visitors’ to lose as Mark Warburton’s men truly stamped their authority on this fixture and went in comfortably one up at half time.

In short, last night, Rangers finally delivered a performance indicative of the side continuing that micro-renaissance this site discussed in recent matches, but ramping it up considerably.

Of course, Caley are eighth in the league and hardly Celtic, but if we are going to castigate Rangers for being held by the likes of Killie, Hamilton and County, we have to equally give credit for convincing victories too.

Niko Kranjcar especially delivered his finest 70 minutes in a Rangers shirt, pulling the strings of this match from midfield like an 80+ Croatian cap should – he was the outstanding performer, and but for Miller’s astonishing goal, would have been a stick on for the MOTM award. His passing was on point, his dribbling mercurial, and he is finally delivering the quality Rangers fans believed they were getting when he first arrived in Govan. My only hope is Warburton removed him to give him a rest, as it may still be believed the former Spurs man is not quite fully match fit yet – but he produced enough in his time on the pitch to show he really can be a fine asset for his new employer.

In truth, Miller aside, Kranjcar was really the only stand out – it was, otherwise, a very solid team display with the unit working hard for each other, but no one else truly producing a particularly memorable individual display, although Tavernier continues to impress on the right of defence.

Central defence, thankfully, was not overly tested, and, predictably, Kiernan was very shaky when under the slightest pressure, losing Doumbouya embarrassingly for the near-miss, but its failings did not cost Warbs’ men too much, and Lee Wallace, right on cue, actually had a pretty decent match apart from one dreadful loss of concentration in the first half. His excellent assist for Miller’s winner did not go unnoticed and there was something a bit more assured and purposeful about his display.

Halliday had a quiet night, while Jason Holt had a bad one – his form this season has been patchy, and he was loose in possession, while lacking composure up front. And, Miller aside, attack was pretty mediocre – Waghorn is hopelessly out of form at the moment, and McKay continues to be ineffective.

But Warburton seems loathe to start with anyone else. That said, given the unit as a whole did do the business last night, you have to argue he got it right. Sure, Inverness came back into it more in the second half, but at no real point did they look like scoring – even if fans’ fear over Rangers’ frail defence would suggest otherwise.

Rangers are simmering at the moment, flirting with making a breakthrough in this division. Up to third albeit having played a match more than Hearts and St Johnstone, there is just a glimmer right now that Warburton’s stubborn persistence is beginning to pay off, and no one would be more pleased to be wrong about his management style than this site.

Rangers went to a fairly solid SPL side’s ground and, like they did at Dundee, but with a little more style, got the result. It is still not as stress-free as fans would like, but there is just a seed of suggestion here that the team is moving, very slowly, into the right place.

Unfortunately the Celtic semi final comes at absolutely the wrong time, with too big a test for a side only showing embers of progress.

Prove me wrong on that one too, lads.