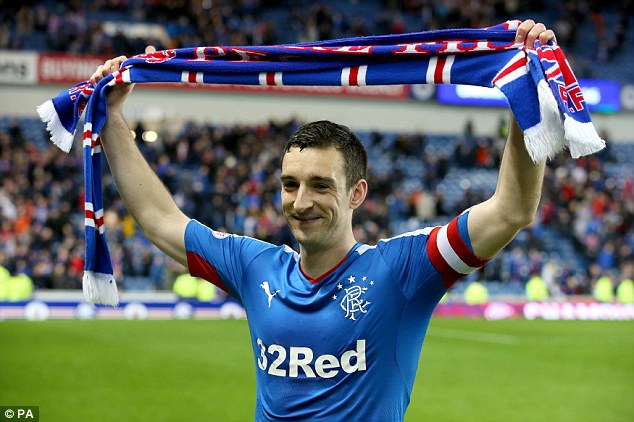 By his own concession, Lee Wallace is not at his best:

“When you are a player and you are searching for your best form – and I put myself in that category, as will some other guys in the dressing room – it’s all down to how you prepare. It means you have to come in here every single day and work that little bit harder, eat that little bit better, study that bit more in-depth and really look to get that form back.”

His attitude to regaining that form is faultless, but without a shadow of a doubt the outstanding left back of the past four years for Rangers who captained his side to the Championship title last season has been some way off producing what we know he can.

No one would question the man’s loyalty – he gave up the national team and far better leagues than the Scottish Third Division in 2012 to stick with Rangers, and he has never complained about any of it. Indeed, he admits he probably sacrificed his country for his club, and he would do it again:

“I was asked before if I thought international football would be sacrificed due to my decision to stay at Rangers. And I said that if that is the case then it’s a fair sacrifice for me. I can look myself in the mirror and happily agree with that. There hasn’t been a moment’s regret from the minute I chose to stay here, it was all part of a plan and that’s going in the right direction. If the other side of the football isn’t going to come back into my career because I’ve stayed here, then I accept that. I’ve not been involved in the Scotland squads for the whole campaign that just passed, so I wasn’t expecting to be in it. So there’s no point in me talking about a squad I haven’t been in for a long time.”

But his form, currently, really is wayward. The last thing I want this piece to sound like is a negative attack on Wallace – I admire his courage, his guts, and everything he has given to Rangers over the past near-half decade. And his form over the past while has been one of the highlights of the Journey.

But Rangers need performers on the pitch, and right now, by his own admission, he is not doing that. Mark Warburton, on form currently, has a better option in a current Northern Ireland international sitting on the bench, just wasting away, and in the past few fixtures there has been a subtle hint and shift to Andy Halliday picking up the captaincy for now.

There is nothing wrong in Wallace taking a little rest. Playing a few less matches and working hard in training to get that form back. Rangers are fortunate to have a few decent full backs, and unless injury dictates otherwise, it would be arguably to Wallace’s benefit to take a few matches out, get the form back, get the hunger back, and return to the fold stronger and more equipped.

He has struggled this season, and he is one of the players who especially does not deserve that. Good management from Warburton would be a subtle rest for Wallace, deploy Hodson in his place for a match or two, and see how it goes.

We all want Wallace at his best – and the sooner he is there, the better.