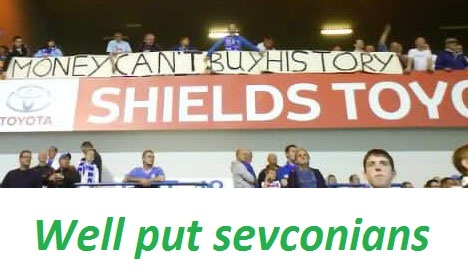 In 2012 Scottish football suffered the biggest seismic shift in its history when Rangers fell into administration and out of the SPL, and there began a journey back to the top tier covering the bowels of the game north of the border before the return was complete this year.

What happened to Rangers four years ago is precedented – Leeds in 2001, Fiorentina in 2002 – just two colossal examples of clubs who suffered catastrophic financial collapse and administration. Even Monaco struggled badly a decade ago, and were completely overhauled by a new administration; and of course, our Old Firm chums Celtic themselves received a new holding company in 1994 due to dire financial calamity and got a new name while they were at it.

But Scottish football, especially online, is obsessed with the idea Rangers are gone, refusing, on t’internet anyway, to accept Rangers are still around. Indeed, the notion of ‘Moonhowlers’ and ‘Sevcoites’ has been penned for those who happily doeth not protest at the integrity of England’s former champions or the Viola from Florence, but refuse to give Rangers the same courtesy.

The truth is Scottish football knows Rangers are still Rangers, like Celtic are still Celtic, like Leeds are still Leeds etc, but the hatred for the Club takes precedent over any rational thinking.

And as the most hated team in Scotland, we absolutely thrive on it.

Why does Scottish football hate Rangers so much? Because Scottish football is scared of us. The club is going in the right direction after so long in the wilderness and is slowly returning to the very top of the game here; and Scottish football’s republican moonhowling left and 45-ridden yesser extremists loathe the establishment club even existing.

But exist we do, and nothing would annoy the lot of them more than Rangers travelling to the headquarters of all that is wrong with Scottish football and winning. Rangers are not just facing Celtic on Saturday, we are going into the lion’s den of everyone who would hate us; and beating them will kill them inside.

It hurt them enough to lose at the ‘relatively’ neutral (it really is not neutral at all, is it?) venue of Hampden, so imagine how Celtic and their friends would feel losing on their own patch to Sevco.

It would tear them apart and put Rodgers under enormous pressure.

It is why Rangers must win this weekend. Those moonhowlers who latch onto every single tweet about Rangers with ‘was it with an EBT’ replies, those sevcoites who live to breathe everything Rangers and to let the hate build up more every day.

There is no ‘goodie’, no ‘baddie’ in all of this, but Scotland has decided Rangers are the bad guy and is not shy telling us.