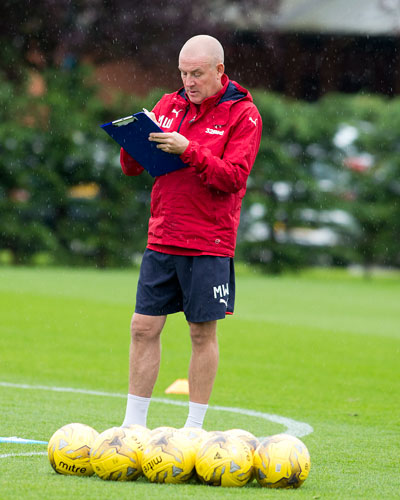 When Rangers secured the services of Mark Warburton in June last year, they had managed to sign up one of the most promising managers in football. Despite his senior years, he was new to the management game, having only gone pro late 2013 with then-League One Brentford.

Gaining promotion at the first time of asking, the Magic Hat nearly did it again the following year with the Bees, only losing out in the playoffs to Boro.

His stock was on the increase, and his move north was seen as a huge coup for Dave King – and that hype was justified as Rangers (mostly) sailed to a Championship title at the second time of asking following the miserable failure by the previous three managers to handle Scotland’s second tier of professional football.

Unfortunately, this season the honeymoon has brutally soured for Warbs, and for the first time, questions are being asked of his ability, with Rangers’ disappointing start to life back in the SPL being magnified thanks to the hype surrounding the club.

But why is he struggling so much? Why exactly is the system which served Warbs so well now looking stale and weak?

When Brentford were in League 1, the standard of the division as a whole was not great – good, but not great. And Warbs was taking over from Uwe Rosler’s high-flying regime which was running pretty smoothly at the time as it was. Securing promotion was a case of continuing that good work.

When they found themselves in the Championship, little was expected of this newly-promoted team, and Warbs’ effective Barca model (4-3-3) found itself able to express itself against bigger teams who tried to play football against him expecting to win.

Hence no expectation delivered good results for the Englishman at Griffin Park. When he arrived at Ibrox, few in Scotland even knew who he was, and for the first few months the results and displays reflected the same approach to him as Championship teams in England had engaged.

However, Rangers being Rangers, expectation grew – unlike Brentford whose ambitions, with all due respect to them, were modest, Rangers’ were not. As expectation grew, opposition started to sit in more, not wanting a ‘battering’.

And while promotion was still achieved, the new land of the Premiership has seen a culture shock for Rangers’ slightly beleaguered manager. Instead of being under the radar with Brentford and able to produce good football without too much hype, the spotlight is instead magnified in his and Rangers’ direction and he is now in charge of the big fish in the small pond.

Psychologically, Mark Warburton is struggling to deal with a defensive league which completely contradicts the more open tactics found in English football while all the expectation is on him to win every match.

Walter Smith’s Rangers dominated Scotland by suffocating opponents when they had the ball, soaking them up and hitting on the counter, while being able to play a bit when need be with individual brilliance. Walter Smith’s system owned Scottish football. Mark Warburton has neither option currently at his disposal – not enough great individuals nor the players as a whole to handle the league, or indeed his own approach.

It is not that Rangers’ squad is bad, it is that it is trying to play to Warbs’ plan in an environment ill-suited to it.

In order to fix it, Warburton would have to completely change his philosophies. Whether he is capable of that is unknown.

Some may wonder then why Celtic’s more free-flowing football works better in the SPL by my logic:

1: It is not free flowing, it is more dynamic – as capable of defence as attack.

2: It has a far higher standard of player.

For Rangers to match Celtic will take a lot of work. The true journey is far from over.