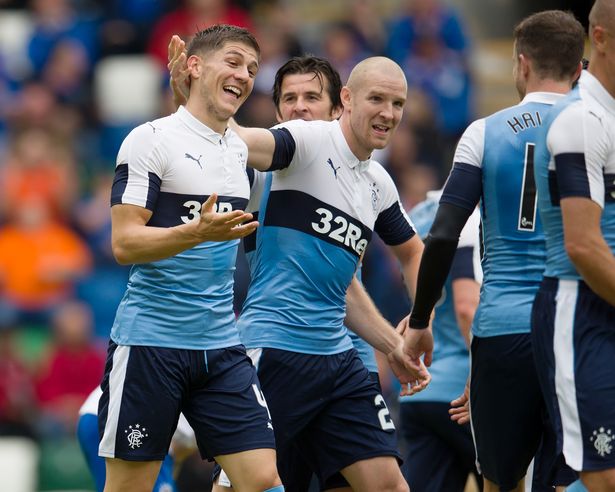 Article by Greg Roots
(Later on today Richard Fillingham will look at tactical approaches Warbs could employ on Saturday, but this morning, Greg asks who he will select as the defence.)
With two sleeps to go until the first SPFL Premiership Old-Firm in history, and the first league encounter since we met in the SPL in April 2012, it is beginning to feel a bit like Christmas eve. The excitement builds up to the point where you can’t sleep, and 7am on the Saturday just can’t come quickly enough.

Just like every other talking point that surrounds our club and fan base, our supporters are divided over a number of issues regarding this weekend’s encounter with our fiercest rivals.

Of course, it is all friendly debate, however there is still no agreement as to who our fans think should line up in our defensive ranks on Saturday. There is still no confirmation as to whether or not Danny Wilson will be fit, so that may only leave Senderos, Kiernan and Hill for selection.

Some fans have doubts over Senderos’ ability to debut competitively in a game of such magnitude, but I would argue that with the fact that he has played for some of the biggest teams in the world; Arsenal, Milan etc. and also at the World Cup and European Championship stage for the Swiss national side. He HAS to start in my opinion.

I have had doubts over Kiernan’s abilities for a while now, more so since the way he handled Stokes early on in the cup final; however the one great performance that he did actually offer was against Celtic at Hampden. He was assured, strong and composed – much unlike he has been recently. Therefore if he was to replicate the firmer form this weekend, he would have to get the nod over Hill due to the sheer pace that Celtic have up top.

Ideally, Wilson would be fit due to his more dynamic approach to the game, as well as the fact that I believe he is a better passer of the ball – meaning he fits in to our manager’s system better. We know, though, that he may lack fitness and that the Old Firm may be a week or so early in order for him to feature, so it seems that we will start with the same pairing that started vs Linfield.

The one thing that our fans can agree on regarding our defence is that we have to be more solid if we are to stand a chance. This isn’t to say that we completely change the system and go back to the days of Smith, but rather we act more like a single unit and cut out stupid mistakes; after all, the goals we have conceded this season have all been highly avoidable.

This is a fact that, whilst it is disappointing to have conceded them, is easier for our management to accept given the smaller effort requited to stamp then out; as opposed to being a collective mess that doesn’t know basic defending – a situation which would pose a far greater challenge to solve.

Regardless of how we line up at the back, our attacking game will be the main focus, and I am confident we can bag ourselves a couple of goals. Will that be enough to take points from the game?