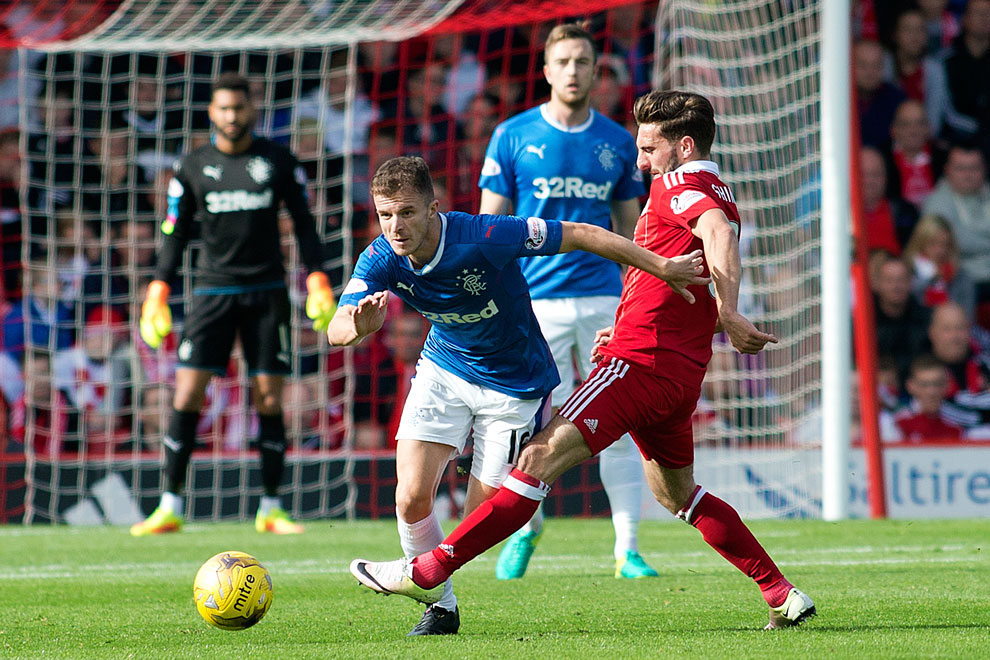 The pressure had been reduced slightly going to Pittodrie thanks to a convincing dispatch of Queen of the South, but the post-match hype over the quality of the display, hype Warburton was happy to humour, led to slightly false expectations once again.

And this has become a worrying trend this season. For every time Rangers beat a Peterhead 5-0 or a Queen of the South 5-0, suddenly everyone connected with the club believes a corner has been turned, before the next match where expectations come crashing back to earth.

Warburton’s selection for the visit to Aberdeen was a pretty predictable one with no surprises, with the usual 4-3-3 formation and Halliday holding in defensive midfield, and despite how obvious it was it still managed to produce something akin to a decent display with some zippy midfield play and a more convincing defence in that first half.

The problem appeared to be the complete lack of any end product whatsoever, and that is another recurring theme against the better quality sides. Indeed, in the first half there were zero shots on target, and Lewis only had one save to make, itself from a wild deflection.

It was the same old Rangers pass pass pass with lots of flanking and overlapping, but a dismal absence of killer instinct – teams absolutely know how to handle Mark Warburton and his system, and with the calibre of SPL sides being a fair old leap up from the Championship, the seventh place Rangers currently reside is, it has to be said, a very accurate reflection of the displays.

Sure, Warburton will curse the call which incorrectly gave the home side a free kick from which they scored a stunning winner, but nevertheless his side created so little, it really only lost Rangers one point because at no point did anyone in a blue shirt look like they believed they could win, and McInnes’ side barely had to defend, in truth.

In the end, fair free kick or not, it is yet another reality check for Rangers who continue to disappoint when it truly counts. Sure, Aberdeen is a tough place to go, but a Rangers with anything more to their game than the same tired old tactic might actually have reaped more, such was the home side’s relative unimpressiveness.

While they were hardly put to the sword themselves, it must not be forgotten McInnes’ side was pretty poor too, but the difference is they took their chances, and looked far more dangerous in attack than Rangers, with flowing counters and close things a pretty regular occurrence.

Rangers are in a quandary right now. Warburton’s tactic continues to flatter against any weak side (something Rangers will only possibly face again in the Scottish Cup) but when against league opposition it is exposed viciously.

Warburton claimed the difference between Queen of the South and County was that against Queens Rangers were more clinical, while against County they had not taken their chances. No mention of the difference in quality of the opponent.

And while there was indeed a lot to commend about the display v Skelton’s side, and it showed signs of progress, anything meaningful derived from it is well and truly doused now.

The Rangers rollercoaster goes on, with more lows than highs it has to be said, and two wins of seven is quite simply abysmal.

Worryingly, it is unclear whether this team or its manager ‘can do better’.