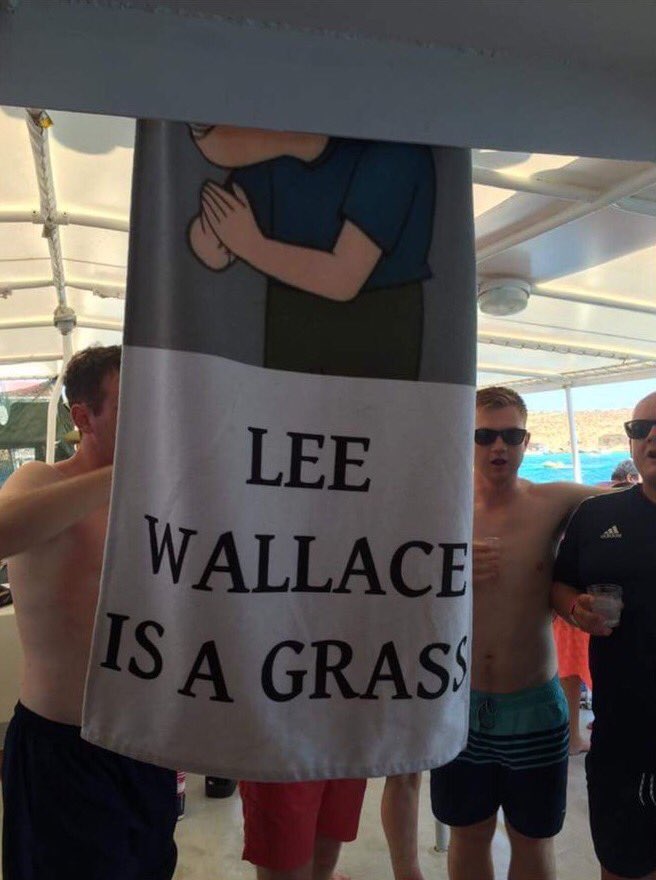 Ibrox Noise has covered the rapidly deteriorating relationship between Rangers and Scotland for some considerable time now.

If it was not the infamous Burley regime, Boozegate and the end of Barry Ferguson and Allan McGregor’s Scotland careers, it was Lee McCulloch seeing how badly the Scottish regime was being run and having the foresight to get out by retiring. Then there was Lee Wallace booed by Scotland fans, Ian Black, booed by Scotland fans and the general cesspit of hate the game north of the border frequently aims at all things Ibrox.

But last night summed up quite starkly just how dreadful this present Scotland regime, be it Strachan, Levein or aforementioned Burley in charge, has been in its dealings with Rangers.

First off the title image. This ‘Lee Wallace is a grass’ thing is beyond nonsense – spurious accusations thrown about by ignorant supporters of other teams claiming Rangers’ captain ‘went to the police’ over assaults to himself and other players on that fateful day at Hampden last season.

He never even claimed it to be true, and his girlfriend even denied on Twitter that he had actually been assaulted but it is worth a bit of a snide dig at Rangers to peddle the line, is it not? But for the increasingly republican Tartan Army to attack one of their own players like this is a new level of pitiful, a shamefully disgusting act and a sure sign of the increasing malevolence of the game’s attitude towards Rangers in this insular and petty nation.

It was apparently provoked because Wallace ‘told Strachan where to go’ after receiving a call up for last night’s qualifier v Malta. Well, actually, no, Wallace pulled out through injury. He was snapped on the flight to Belfast, giving those vindictive little fans of other teams a reason to hate him – ‘look at him, he’s perfectly fit, and just pulled out of Scotland to be spiteful’.

Well, actually, no, he simply went with his club to give moral support because he was injured, and was not involved in the match versus our good friends Linfield on any level. Not on the bench, nothing. But why let facts get in the way?

Then we turn our attention to Barrie McKay. Also receiving a call up by the Ginger One, McKay flew out with the squad and did his bit, behaving as professionally as we have come to expect from the wee man. We did not expect him to start, but a five or ten minute sub cameo at the end especially given Scotland were 1-5 up against their hosts seemed more than agreeable.

Nope. Ignored, in favour of Anya and Fletcher, among others. Rangers TV’s Tom Miller nailed it with this tweet:

Absurd that @BarrieMcKay didn't get game time tonight. If you can't introduce young talent with the game all but won when can you ?

What a God-awful waste of Barrie’s time. One of the most talented attacking players Scotland has produced in some years, and Strachan did not think he merited a sub appearance even when 5-1 up. Why on earth bring him only to completely snub him?

It is absolutely no wonder so many Rangers fans have had it with the national regime. Many still loyally support because it is their country, but there have just been too many anti-Rangers sentiments among it for this supporter to follow suit.

It is no coincidence strong Scotland teams have always had a strong Rangers contingent. Now that it is clear even Rangers’ best Scottish players will just not be involved (McKay, Wallace, Miller, even an on form Halliday or O’Halloran) can someone tell me the point?