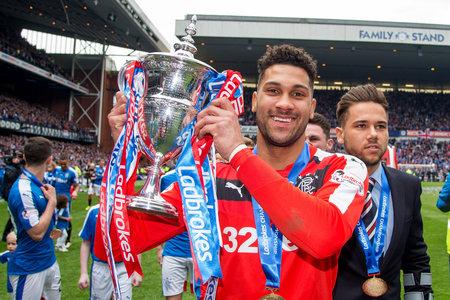 My colleague Richard Fillingham was one of the most outspoken critics of Wes Foderingham last season, and did not believe in a month of Sundays the former Swindon Town goalie could hack it in Scotland’s top flight, such was his admittedly unconvincing displays in goal for Rangers in the country’s second-best tier.

I think it is safe to say Wes has proven Richard, myself, and many other doubters very wrong by producing easily his career best and has been one of the few squad members truly able to hold their heads high going by their contributions this campaign thus far.

While Wes probably will never be of the standard of Klos or even McGregor at their best, the firmly-established number one has been one of the minority of Rangers players to adapt well to the step up to the SPL, and has looked assured, confident, strong, composed, and has even been at ease with the ball at his feet.

His save yesterday point blank with a sharp low dive to his left was a massive factor in his side not dropping all three points to County, and was probably the best save he has made since joining Ibrox last year. The fact it was a hard-driven grass cutter which Rangers’ #1 would have seen extremely late such was the traffic in front of him was only compounded by not only saving it, but holding it rather than spilling.

It was exceptional, and summed him up this season.

I am not going to go overboard and say he is a future legend in making, or do the classic ‘future Rangers captain’ when anyone under the age of 26 looks half decent in Rangers’ shirt, but credit where it is absolutely due – Wes Foderingham has delivered in the SPL, and is only one of Rangers’ few players to do so.

But as I say, not only has he produced, but he has arguably (Forrester, Tavernier, and maybe Rossiter & Windass have cases too) been Rangers’ best player this early campaign, period.

Quite a turnaround for a stopper many were completely dubious had what it took to step up to the SPL.

Turns out he is one of the only who has.