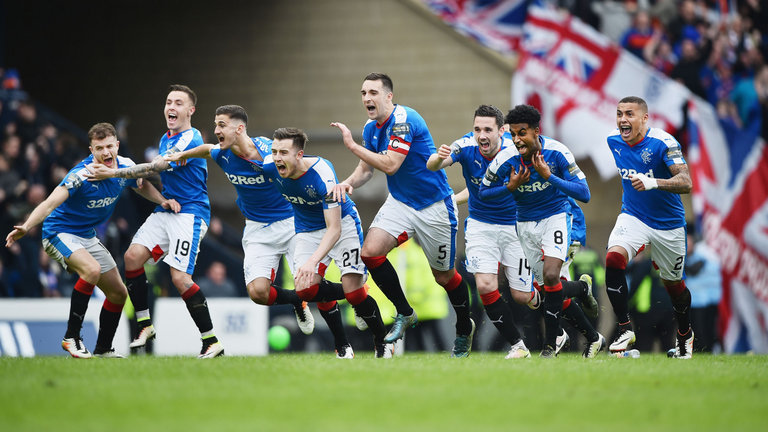 Let’s not beat
around the bush; Rangers have been disappointing so far this season. Naively,
most Scottish football fans expected the Gers to go toe-to-toe with arch rivals
Celtic at the top of the division in their first season back in the top flight
but it hasn’t exactly panned out that way after a difficult start to life in
the Scottish Premiership.
However, there is
still plenty of time for Mark Warburton’s men to turn their form around as they
look to build a title-winning side in the coming years. Who knows, a victory against Celtic in the Scottish League Cup semi-finals
could go a long way – and a derby day success would certainly go down well with
the fans after their recent 5-1 defeat.
Being honest, the
League Cup wouldn’t have been Rangers’ number one priority at the start of the
campaign but silverware is silverware at the end of the day. Furthermore, the
chance to get one over on their closest rivals is almost too good to turn down;
and that is why the Gers should harness all of their energy on that fixture.
It will take a
major meltdown for Rangers to pip Celtic to the Premiership title now but a cup
success would hinder Brendan Rodgers’ plans of winning the treble in his first
season at the club. At the time of writing, Warburton’s side are priced at 10/3
in the latest online betting odds at Betway.com and plenty of Gers fans will fancy an
upset in the semi-finals.
On paper, Rangers
stand a decent chance of advancing to the final – confidence is a huge factor
in how the rest of the season will pan out. If Warburton can get his players
believing again, Rangers could surprise us all and challenge for silverware in
both cup competitions; AND they could still pip Aberdeen to second in the
Scottish Premiership.
Whilst Warburton’s
men should be aspiring to achieve much more than second-place, a cup success
and a runner-up spot would more than suffice for their first season back in the
top flight. Remember; this is a long-term project. Fans shouldn’t lose hope
because of a rough run of results in September…
Fine margins may be going against Rangers at the moment but their luck will change
for the better at some point. Without a doubt, Mark Warburton is a man under
pressure but fans should keep faith. After all, a victory over Celtic in
October could completely transform the mood at Ibrox…