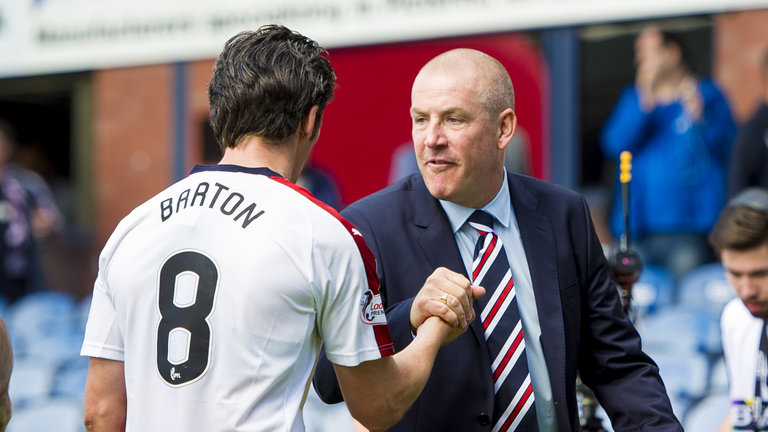 Regular readers of Ibrox Noise will know we have not been hugely complimentary to Mark Warburton recently.

The fact is the honour is his, and he knows it, as it is the honour of anyone who represents our famous club and is their responsibility to carry themselves with dignity, class and humility.

And right now that most definitely excludes Joey Barton.

When it comes to player versus manager there is only one winner, and only should be one winner, and that is the manager. Thinking back to the past while few disagreed at the time with the decision, it was wrong of SDM to politely fire PLG over the Barry Ferguson saga and take Rangers’ captain’s side. Ultimately it was probably the right outcome and paved the way for the return of Uncle Walter, but morally speaking the manager is the boss, and should always be supported by his board or chairman.

Which is why, in this case, there can only be one winner – while Barry produced on the pitch (strengthening his case), Barton has not, which gives him essentially no case at all.

From our understanding, there was some kind of strong disagreement on the Murray Park pitch – reports have varied between it being with Halliday, or Weir, but what is definitely clear is the Supreme Ruler Mark Warburton told Barton to calm down and Barton failed miserably to heed, instead turning on his manager before being ordered away until Monday.

Since then he has offered a strange apology in which he decided to criticise Warburton again, before deleting a tweet in which he once again affirmed he believed he was in the right.

It does not matter if Barton did indeed say what needed said at Murray Park, and indeed, the odd heated exchange following a dreadful result does show the players care. But then taking it out on the manager, before refusing to apologise to him twice and being sent home to stew is unacceptable.

We have been harsh on Warburton around here recently, as we just want the best for Rangers and want the Hat to get it right, but in no way is he at fault for any of this and in no way does he deserve to be disrespected two or three times by the player he effectively put his reputation on the line to sign.

And to add insult to injury Barton goes on TalkSport when he should really be keeping an extremely low profile.

If the ex-Newcastle mid was producing on the pitch, these indiscretions would be borderline forgivable, with a more convincing apology afforded first. But he is not – far from it, and as such one really has to wonder if Joey Barton has a career left at Ibrox now.