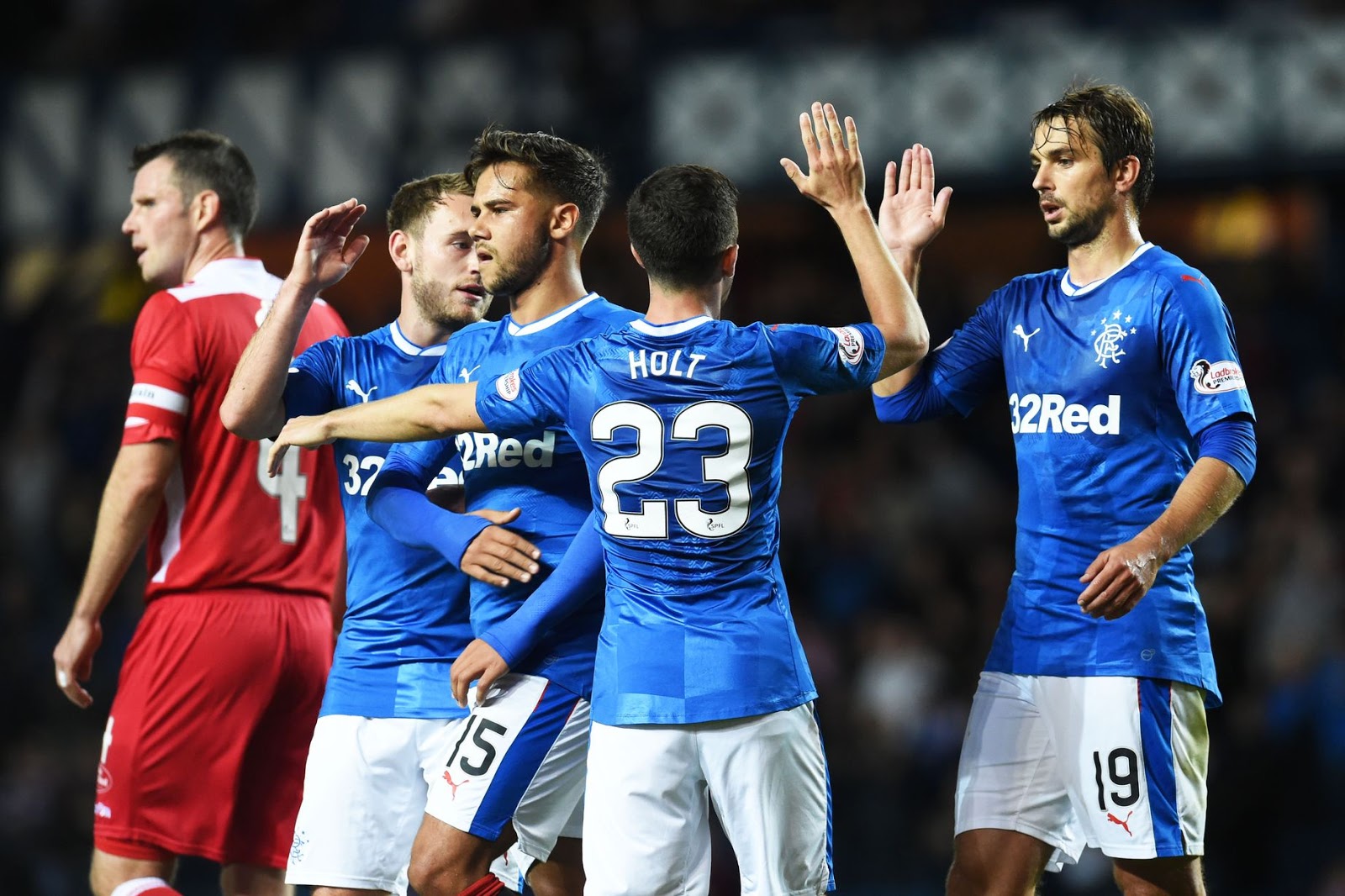 Preparation for tonight’s match could barely have been worse. ‘Barton-gate’ had threatened to derail Rangers in as hefty a way as it could, with the midfield anchor expressing various disparaging remarks about regret over leaving Burnley and apparently making an appearance on Breakfast TV tomorrow.

None of this helped Mark Warburton prepare for a very tough test against arguably the country’s form side and serial Rangers’ bogey outfit Queens, and he certainly was not further aided by a nasty injury during the warm up for in-form Josh Windass, which led to a last-minute shuffle of the enigmatic Niko Kranjcar taking the former Stanley creative man’s place.

And while that first half was not the absolute best Rangers have played under Warburton, while Kranjcar struggled initially to make his vision count, and the midfield overplayed most passages, there were undeniably signs, albeit subtle, that the slight progress made against County was continuing again.

Rangers absolutely dominated the first half, with 80/20 possession after half an hour. And for the first time in too long, Rangers made that superiority count – as suggested around these parts, we always wondered what effect Kranjcar’s vision behind O’Halloran’s running would have, and we got our answer when it fed Holt for a sharp finish to make Rangers’ possession and passing have a final product.

From there on in, despite the visitors making more of a fist of it for the first stretch of the second half, the 5-0 scoreline in no way flattered the hosts and gave a rare glimpse of the kind of form which made Warburton an instant hit last season.

Defence looked more stable, with only the rarest exposure in the first half (for which Wilson committed a necessary professional foul) and even in the second, Gilks was hardly under pressure.

Midfield still found itself guilty of over elaborating, with too much sideways passing and intricate one-twos, but this was a match where the more Rangers wore their Palmerston opponents down, the more joy Warbs’ men got.

True, this has been fairly consistent form in the League Cup – Rangers have 20 goals and have not conceded a single one, but this was the kind of display which sadly became an exception over the course of the past six or seven months.

Kranjcar especially was my man of the match – while 60% of his vision was wasted and led to nothing, the remaining crucial 40% found space and team mates, and he played a huge role in nearly every goal as a result. His vision for Rangers’ third to find O’Halloran out wide was exceptional, and that is his raison d’être. When he gets it wrong, it is messy and frustrating, but when he nails it, he can be as productive as anyone.

O’Halloran too had a good night, also creating assists and hurting Queens’ back line. He has certainly given himself as good a case as any for inclusion on Sunday.

But it was the overall ruthlessness that will have pleased Warburton and the fans tonight – Queens have been a tough nut for Rangers the past four years, but tonight they fielded their strongest team for many years which flies high atop of the Championship, yet Rangers dismantled them with ease.

Sure, it took a little while to get there, but it was a deserved scoreline, whether or not Forrester should have been on the field or not (he really needs to cut that nasty and ugly side of his game out, a side we have seen before and which undermines everything productive from him) – Rangers were rampant, and finally our manager has something to smile about leading into Sunday’s critical trip to Pittodrie.

Get three points v Derek McInnes’ men and Rangers will have proven they are on the right path to proving their doubters, this site included, thoroughly wrong.