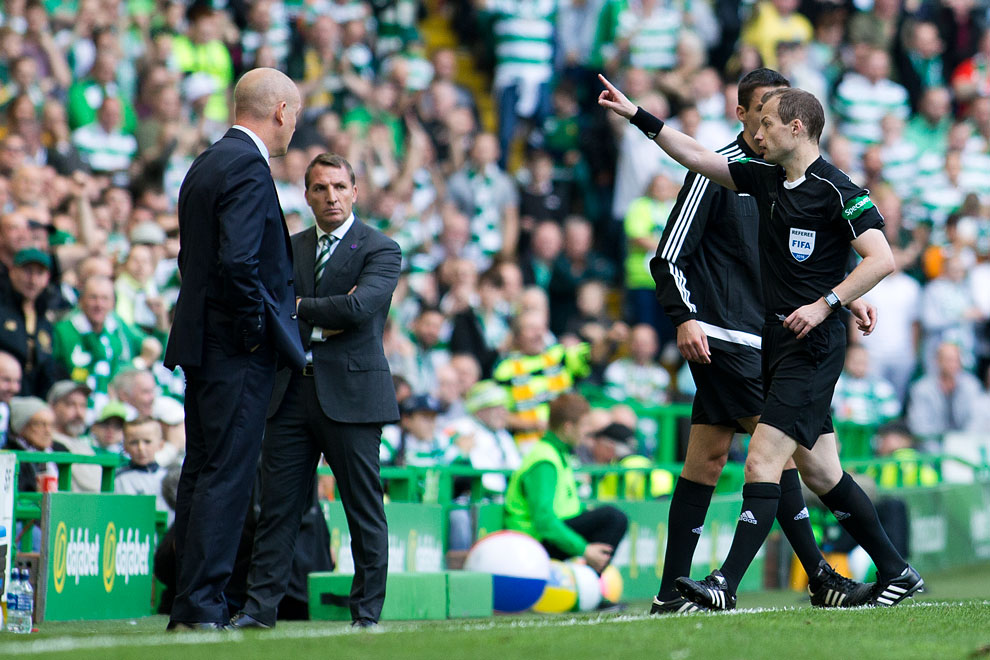 We were never going to win today. Celtic were flying, scoring for fun, meanwhile we were making more defensive errors than I care to remember which resulted in 8 points out of a possible 12. Not the end of the world, but far from perfect considering the poor level of opposition that we had played to date.

However, what ensued over the 90 minutes at Celtic park was beyond our worst nightmares. Only Tavernier and Windass had decent games, meanwhile the rest of the team looked as if they couldn’t care less and there genuinely was a sense that players like Kranjcar and Barton felt that they were too good for the occasion; as if they had to just turn up and everything would click into place.

Joe Garner put himself about well, and Kenny Miller as ever was tireless and committed to the cause, but the goal created and scored by them was no more than a consolation. To go in only 2-1 down did not reflect the balance of play, as Celtic played us at our game, controlling possession and overpowering us in the middle of the park. The second half didn’t start too badly, and if McKays’s curled effort had crept in then we could have been looking at a totally different game. However that wasn’t to be, and Celtic shifted up a few gears and put us to bed without much real effort.

Sadly it wasn’t to be and we now find ourselves 4 (effectively 7) point behind our great rivals, but that is not what worries me. I accept the defeat and to an extent I accept that we were never going to win (challenge for?) the title this season. However, the amount of basic mistakes that are being made is getting to the stage where enough is enough. Our ‘magic’ manager has got the balance of the team very wrongly a few times of late, and the amount of individual errors being made in the defence is getting ridiculous.

Yes we lost by 4 goals, at least 3 of them were entirely preventable. Just like Boyd’s at Killie, Dundee’s and Motherwell’s opener. It is getting very tiring. Very wearing, and there has to come a point where it stops.

The worrying issue is, though, that how do we stop it? No matter what pairing we play at centre half, mistakes are made. What annoys me is that Rob Kiernan seems to escape the worst of the criticism, meanwhile his partner (whether it be Hill, Senderos or Wilson) gets all the blame. The reality is that all 4 of them have been duds in their short (some far shorter than others) Rangers careers.

So, the defence is poor; but why didn’t Warburton fix it over the summer you ask? Whilst Dave King didn’t go all out Manchester City on the transfer market, he gave Mark Warburton more than enough backing to build a team which could at least give a good account of itself in the Scottish Premiership. Something which it has not really done so far.

Somehow the manager saw it fitting to spend £20k a week on Joey Barton, who so far has talked the talked but hobbled around when it comes to walking the walk. Since he exclaimed that he was in a different league to Celtic’s captain, they have qualified for the UCL and beat us 5-1. Why do we need to put up with that? He is a bigmouth and has been wherever he has gone. To me it seems as if he is here for an easy ride, and it has to stop. He is not anywhere dynamic enough for the way we play, unlike the highly energetic Rossiter, and may well find himself on the bench while the manager tinkers with the team to try and produce the free flowing attacking football that we know it is capable of.

We are at home to Ross County next week, and the hard hitting reality is that they are one of the teams that we really might be properly competing with this season. On the evidence of the first 5 games, we can kiss goodbye to the top 3, and unfortunately 55 is currently a pipe dream.

Sorry for the negativity, but ever since beating them in the semi-final last season we have been shocking, and now it is starting to cost us.

We are the People.