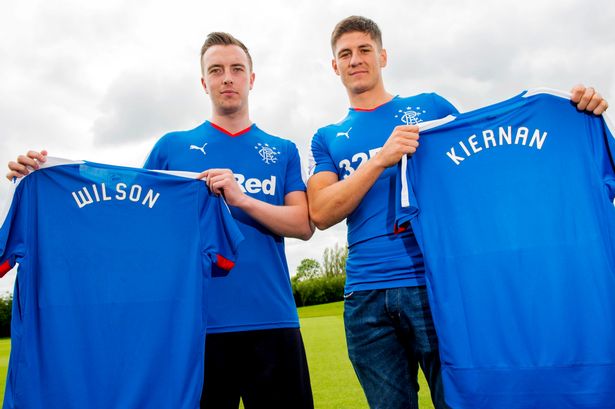 Rangers fans have been debating over the defence for as long as we can remember. Under Ally McCoist post-admin, complaints about Ross Perry, Darren Cole and Emilson Cribari were common-fold, before they became about Lee McCulloch and Bilel Mohsni.

Now those defensive demons are back again with the threadbare selection being currently between Clint Hill, Danny Wilson and Rob Kiernan, none of whom have filled the support with much confidence apart from fleeting glimpses now and again.

While Matt Crooks returns from fitness (by all accounts he had a decent night for the unders v St Mirren slotting in at central defence) he remains a non-option, but he could be a possibility a number of weeks down the line as he regains match fitness.

Until then, though, and with no guarantee Philippe Senderos will don the Light Blue any time soon, Rangers fans face the worrying concept of defence continuing to be Danny Wilson and Rob Kiernan.

While, at his best, Wilson is arguably the better of the two (with his UCL, EPL and SPL experience compared to Kiernan and his notorious five-year loan spell at eight different EFL clubs and one SPL as he struggled to impress anyone), nevertheless both simply do not work together.

There is no understanding, no blend, no communication, and the number of times we see opponents chipping an easy lob over both players’ heads to get in behind the rearguard is frightening.

Many argued the system did not help them, and that is true for last season; as the anchor, Andy Halliday did not grasp playing as a defensive midfielder, reading the play and protecting his defenders especially well. However, the defensive problems persist, despite deep-lying ball-winners like Joey Barton and Jordan Rossiter now in the side, so evidently, the issues lie deeper than just who gets selected at DM.

Warbs’ initial solution was to place Barton deeper, for example against Hamilton. It did not work – pure numbers did not rectify the ailment. Then we saw Barton higher against Motherwell, playing more as a box-to-box mid – but still Rangers’ defence creaked despite the excellent Rossiter in front of them.

No, whatever the tactical ‘yes’s’ and ‘nos’ of Warbs’ approach, unless Rangers secure Senderos quickly, fans face the frankly awful inevitability of Danny Wilson and Rob Kiernan being the defence for the foreseeable future.

That is a backline that will simply not cut it. It barely did last season, and only got a get out of jail card thanks to the lower standard of opposition – and even then, it got exposed many times, especially by the higher calibre opponents.

It is worth remembering that Rangers have only beaten ‘better’ sides away from home three times in 90 minutes under Warburton – Killie, Dundee and Motherwell. And in the losses (and even the wins) have seen the defence frequently exposed, both by the system, and the calibre of our CB pair.

Surely Mark Warburton knows this only too well, and is as desperate for Senderos to sign up as soon as possible.

Because no one wants another season of Danny Wilson and Rob Kiernan.