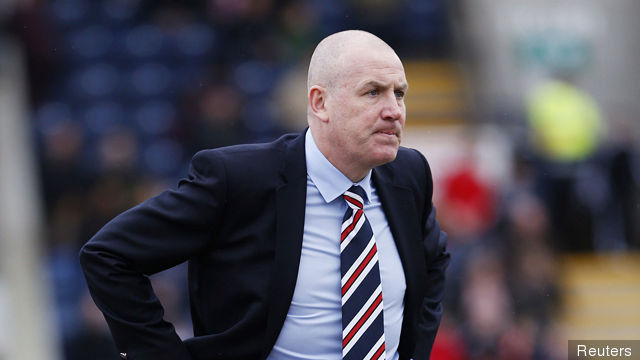 Few Rangers fans would deny the side has endured a bumpy start to life back in the SPL. While not quite plummeting to unfathomable depths of awful, nevertheless the team has stuttered badly, failing to pick up the pre-Old Firm form which served Mark Warburton’s men so well last season.

Post that colossal result at Hampden, Rangers’ displays have been erratic, inconsistent, flat, and lacking in the flowing football we previously expected, spoiled as we probably were at the beginning of last season with borderline cricket scores.

The first four league matches have given us four unimpressive displays, with glimpses of what the side could do only appearing now and then. Indeed, both the players and Warburton himself have been on the sharp end of some real criticism, both from this site and many, many others, for the first real time since he took charge last July.

The Magic Hat was bewildered by the negative reaction to losing at home to St Johnstone last year, but he will be a lot less confused over the critique this time around, admitting performances just have not lived up to expected standards and conceding he himself is struggling a little to figure it out.

Hence, this upcoming international break, on the back of a painful draw at Rugby Park, could not have come at a better time.

Mark Warburton and David Weir absolutely need to take this chance to regroup – both their own philosophies and the team’s direction. They have a solid 10 days to re-plan (including using the Linfield friendly), think about how to go forward, and how to get round SPL sides with infinitely more ease than the disappointing results we are presently witnessing.

Summer break allowed Rangers to recruit – to get some momentum with the League Cup, and let the new players bed in as much as possible.

The commencement of the SPL season though has shown exactly what Warburton’s tactics lack, what the players need to give, and frankly the damage from both sides’ failures at this level could have been so much worse than 8 points from 12.

Hence Warbs now truly understands what is needed at this level. He has a week and a half to go back to the drawing board and the training ground and try new things. To get as many players on board with his philosophies and willing to run through brick walls for him.

He surely now realises his public sentiments of playing the same way in the SPL as he did in the Championship simply will not work. His lack of utilising alternative tactics has hurt Rangers, but nowhere near as much as it could have, as have the underwhelming displays from a great number of players who have not adjusted to the higher level the way many expected.

Both of these have 10 days to fully process the SPL – what it demands, what it expects, and what they need to deliver in order to return a credible league campaign.

Naturally the Old Firm match has simply come too early. Celtic are overwhelming favourites on their own patch to take the three points. Expectations are low for this one.

But Rangers fans need to know their side will fight for them, that their side will be guided correctly by the manager, and that even if we do lose, there are signs of progress, something to work with.

This break is perfect to allow the critical adjustments to be planned and implemented. Because if Warbs does not decide to try something different, this is going to be a long, long season.