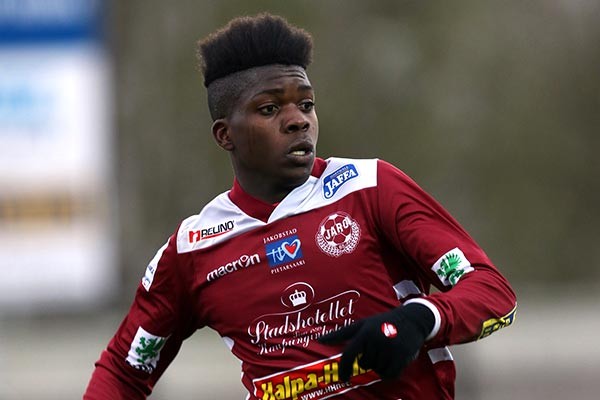 According to a report in the Österbottens Tidning, the Finnish newspaper is insinuating that Serge Atakayi is set to complete his move to Rangers within 24 hours. They say he is flying into Glasgow on Monday night for a medical and if everything goes to plan, he will sign a deal which will be his first professional contract.

On the 29th April 2015, Serge Atakayi became the youngest ever player to appear in Finland’s Veikkausliiga aged just 16 years, 2 months and 30 days when he appeared as a substitute for FF Jaro against Ilves. The remarkably talented youngster went on to appear 15 times in season 2014-15, scoring twice, and scaring fullbacks up and down the country.

Serge has a remarkable story, one of chance decisions, perseverance and adversity.

He was born in Kinshasa, DS Congo on the 30th January 1999 into a poor family. He joined local team AS Leopards Dolisé as an 8-year-old. In 2010, Leopards sent an U-11 team to the annual Helsinki Cup in Finland. The team finished third with Atakayi the top scorer. Remarkably, immediately after the last game, the coaching staff and all the 10 and 11-year-old players marched to the local police office and claimed asylum.

Atakayi spent a month in a processing centre, before being admitted to school to learn Finnish. To this day he lives in a group home for underage asylum seekers. Because Serge does not yet have Finnish nationality, he has been unable to represent Finland’s junior national teams, except for 2 friendlies against Sweden at U-15 level where his inclusion was pre-agreed.

He can play on the left or right wing, or even as a number 10. He is an excellent dribbler and possesses lightning pace and ability is one- to -one situations. He has the ability to go outside or inside onto his preferred right foot. He will drift from wide areas into the middle where he can use his good final ball and ability in tight situations to his teams’ advantage.

It is hard to ignore the obvious comparison with Atakayi’s idol – Raheem Sterling. Atakayi is also a dribbler of fine poise and balance, and can cut inside to unleash a strong shot. In terms of improvement Atakayi needs to become more consistent, and also show more desire to recover the ball when it is in the opposition’s possession and perhaps work on his weaker left foot.

Now a 17-year-old winger, but could easily play as a striker as he progresses to become a top player. Atakayi still plays in the Finnish league with FF Jaro who play their matches in the Pietarsaaren Keskuskenttä stadium in the city of Pietarsaari, which holds only 5,000. Serge scored two goals in his final two matches of last season. On Sunday 17 May he lined up against HIFK Helsinki, played on the wing and scored a good goal and only a few days later he started against VPS Vaasa on Thursday 21 May, and scored again – wow!

He was at Leicester City for a week on trial and also at Murray Park with Rangers earlier this year to see if he could impress the Ibrox side with a view to signing him for the future. He has also had three trial spells with Fulham, so he is keen to play his football in the United Kingdom.

If it is true that Rangers want to sign him, it will involve a fee after FF Jaro gave Atakayi a one-year contract extension, before he left for England and Scotland for his various trials.

It is believed that Rangers moved quickly to bring this potential star to Scotland having sent academy coach Alan Boyd to watch him play in his last two matches of the season, and he was very impressed with his displays, saying:

“He is a very good prospect and it will be good to see what he can do training with Rangers. I liked the way he played and he looks like he is learning about the game all the time. The next step is to see how he fits in at Rangers and how he trains with us. So yes, we have a serious interest in Serge.”

Rangers’ recruitment drives are in high gear at the moment as Warburton, Weir and McParland seem to be planning for the future behind the scenes. Let’s hope their actions are transferred to centre stage on the Ibrox turf.