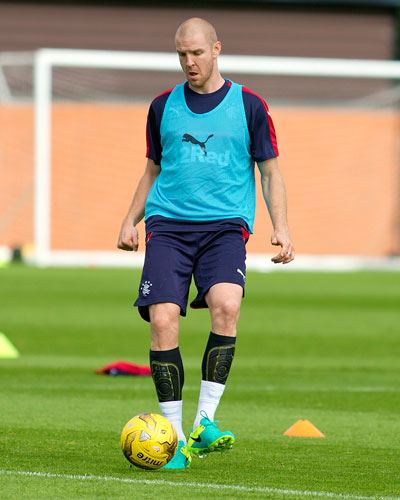 Following Rangers’ hard-fought maiden SPL win on their return to the top flight at Dens Park last weekend, a feeling of moderately-increased optimism has undeniably been tangible among the supporters.

It is a far cry from league-winning expectancy, but there is a clear belief now Rangers can produce a credible Premiership campaign, showing grit and steel as they did against Paul Hartley’s men on their own patch to take all three points.

Buoyed by this, an accelerated transfer targeting strategy since Saturday has consequently pinpointed the final two slots in his squad that Mark Warburton has been keen to fill for some considerable time; a centre back and a striker.

As most Bears will know, Switzerland’s former Arsenal and Milan defender Philippe Senderos is currently going through his paces at Murray Park, a story brought to you some weeks ago here, while Preston North-End’s Joe Garner is reported to be bringing the finishing touches to his £1.75M move north from England’s League One.

From those two vacancies being itches Rangers just could not scratch, over the course of a few short days they may now be filled by a former EPL, Serie A and La Liga ‘veteran’ (he is only 31), and a highly-experienced 28 year old striker with a glut of matches under his belt at the highest levels of the Football League.

Reports are that Garner will complete his move today, with a medical to be carried out this afternoon then the formalities thereafter. Whether the deal will be announced today remains to be seen; but Rangers are getting a lion of a centre-forward, a striker who can absolutely score at this level, and who scored one of the finest goals in recent years with a stunning 25-yard volley against Rotherham.

His worth ethic is undoubted too – he will battle for every inch of grass, every ball, and he will become a big favourite at Ibrox; PNE fans are mostly disappointed to see him go, such was his popularity down there.

And the fee proves that the answer to this is yes; Rangers are indeed ready to make a million pound signing.

As for Senderos? World Cup and European Championships experience under his belt not to mention the best three leagues in Europe and the Champions League to boot. All before he has hit 32; for a Bosman, you could rarely find better than he. He will stroll over the SPL, with something to spare.

Any Bear being asked at the start of the window if those three would be desirable signings would have ripped your arm off for them.